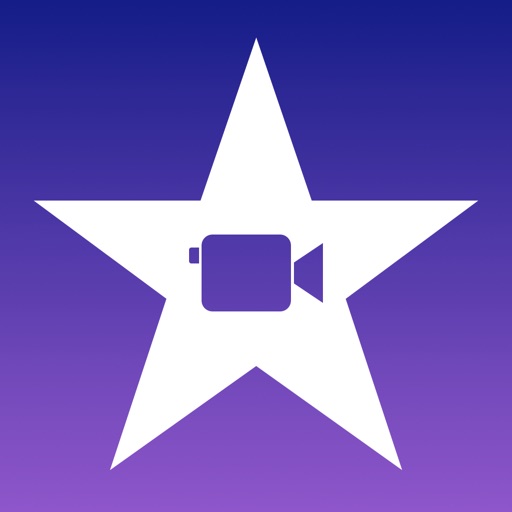 With a streamlined design and intuitive Multi-Touch gestures, iMovie lets you enjoy your videos and tell stories like never before. Browse your video library, share favorite moments, create beautiful movies, and watch them on all your devices in iMovie Theater. And with the iMovie extension, it’s fast and fun to make every video more memorable — right in the Photos app. 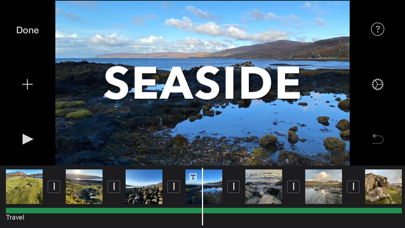 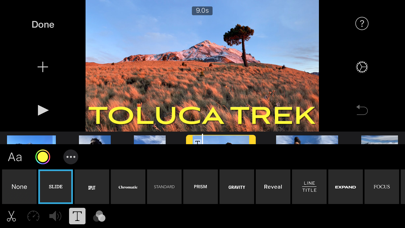 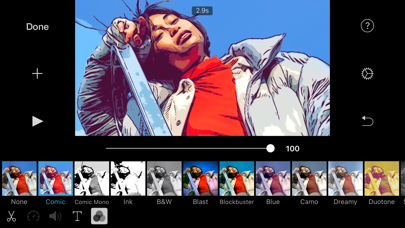 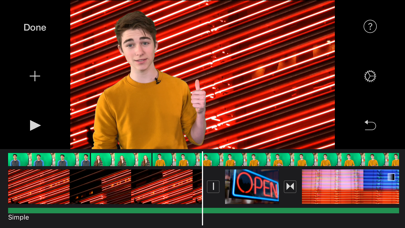 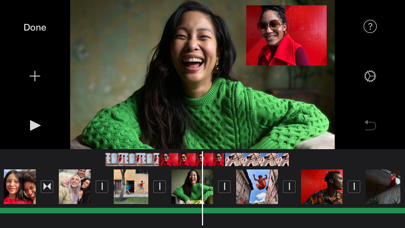 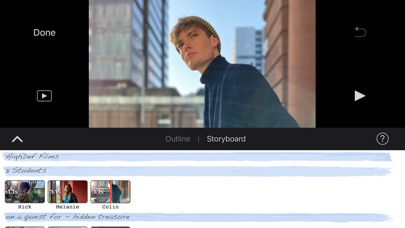 Make every video more memorable
• Use the iMovie extension to enhance video clips right in the Photos app
• Add a video filter, animated title, and soundtrack to any clip
• Instantly save new video clips to your photo library

Make Hollywood-style trailers
• Choose from 14 trailer templates with stunning graphics and original scores by some of the world’s top film composers
• Customize movie studio logos, cast names, and credits
• Select the best videos and photos for your trailer with the help of animated drop zones
• Record video for your trailer right in iMovie

Create beautiful HD movies
• Choose from 8 unique themes with matching titles, transitions, and music
• Give your movie the perfect look with 10 Apple-designed video filters
• Enhance your movie with slow motion, fast forward, picture-in-picture, and split-screen effects*
• Create a soundtrack using built-in music and sound effects, songs from your music library, and your own narration
• Fine-tune your soundtrack with audio controls including trim, split, duplicate, and fade

Before This Version Their Was Old Version 2.9.9 Which Was The Best But Now It Is A Worst App It Will Be Good If It Downgrade To old Version (Or) Give The Option That The Version We wants to download we can please It’s a request try to solve it 🙏🏻.

Good but quality is off
goalstryker1

I have used iMovie for about 3 years but I’m switching to computer to edit because the quality isn’t quite there.

This app needs a fix, the thing is that when we are trying to do a voice overlay we can’t hear what’s happening in the video/movie, which makes me place the voice overlay at the wrong spot

Broken. Maybe just for me?
rexdangervest

iMovie is a great app with tons of great options to edit! But that’s not what I’ll be talking about. I dunno if it’s not working for everyone or just me, but it won’t let me add photos into Movies anymore. I used to be able to, but now when I click on the photo I want to add, it doesn’t give me any options to add it, to put only the audio, to green screen it, or anything at all! It’s just glitched for me I guess. But other then that, this is one of my favorite apps ⭐️🌟💫❤️💜💙

This app is amazing
lolguffeee

I feel exactly the same way as the person who wrote the review “almost perfect, almost.” I like the trailer templates, but I want more freedom.

It’s so frustrating! I edit a video and normally all goes smoothly and I can export it from my iPhone iMovie app to my camera roll. And then randomly i will try to export and it will tell me that “There isn’t enough storage on my iPhone to be able to export” when there’s in reality 150+ GB of storage available. There’s currently no fix for this but to erase the app and re download it... but if I do that, I lose myself projects. Please help!

You messed up
f huh ffefvfyhvf

Before this app was great for uploading YouTube videos. I have to record on my Xbox and use my phone for audio and this app let me do that. HOWEVER whatever was recently done to the app makes it to where all audio is sent directly to the front of the video. Attempting to move it is impossible as it cuts that part of the audio. Why was this done? It’s not helpful in any way it just creates problems for me. No other app worked like this one and now I can’t use it because of your stupid decision. FIX THE APP

Gigabytes are insufficient when I try to re-install it after saving up storage.
1027lance

The size of iMovie is taking up all my space on my iPad. We believe that you should consider lowering your storage amount.

Usable, but frustrating and not user friendly
Everything-else-was-taken

It’s so broken. So many issues, not user friendly, they don’t explain anything, but you’ll make a video alright. There’s no help whatsoever with finding your way around so you have to do it yourself, you can’t even upload GarageBand music that’s over a certain storage limit (despite countless articles written by Apple themselves saying you can import any GarageBand music into iMovie) and whenever you want one of their songs, you’d better take some Advil because you’re about to get the biggest migraine of your life. If you add in a song you think will be good, it’ll stretch the whole video. It doesn’t matter if the video is 2 minutes or 12. It’ll go the full video length. And, if you perhaps, split the song, because it’s too long and you only want it in that area, the song changes. Suddenly it doesn’t fit into your video. Then you have to delete the other portion and move the song. Oh, wait, it’s a different part of the song now because you moved it! It doesn’t matter how far you move it, how small you trim it, you ultimately have to conform YOUR movie to THEIR songs because no matter how minute the change is to the song, it just picks a new part and assumes you want it there. Example: I wanted a song with a slight buildup of drums to match up with one part of the video that would transition when the chorus kicked in. Then, the moment I confirmed it to my video, I listened and it was at the end of the song, completely silent by the end of my first clip. After about forty five grueling minutes, the song still isn’t confirmed and I’m writing this review. Don’t get this app if you’re seriously considering editing videos. This isn’t for real editors, this is for people who want to get something free and make short videos. But this isn’t the only program Apple has that isn’t user friendly, and all that (including horrible customer service and lack of care on Apple’s part) makes me regret buying my iPhone. “Best phone in the world, with the best systems in the world.” Best way to get cash quickly, I think.