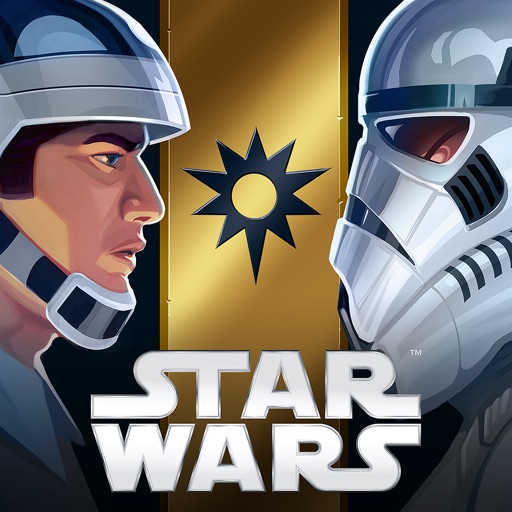 I think we can all agree we don’t like the defense story mode. REMOVE IT. That simple Disney!

Played this game to lvl 10 empire and gave up. Impossible to level a base without winning squad wars. Base defense is a joke. Play something else.

Don't bother with this unplayable junk it crashes every 30 seconds and the company makes no effort whatsoever to fix any bugs of any kind at all ever this app is complete garbage if I could rate with no stars I would probably complain about negative stars this "game" is a -5 stars easy.....This goes for both android and ios, everyday I try to play this game is met with great and disappointing failure. Believe me when I say I really want to love this game being the Star Wars fan that I am, witch makes this game all the more disappointing. Hey guess what I'm not going to complain anymore because I just deleted this hot mess....

The says it needs an update but there isn’t anything there when I open the AppStore it doesn’t have an update. (I hope my game isn’t glitched.)

I love this game

This game let's you have freedom to choose a side

Units shoot walls instead of walking through adjacent opening. Nagging loot crate and gambling adverts. This game had potential but will fail because of the gambling and in game micro transaction advertising.

*updated review 12/2/17*- very unreliable game play, and has only gotten worse with mandatory updates. Let's just say that I would be very disappointed if I had actually dropped any money on this game. You try to tell tech support about the problems, but everything is you or your devices fault and nothing on their end they always seem to say. They update with new events and objectives to peek interests and game play; yet don't seem to have the server strength to handle all the extra volume of game play and players. Nothing like spending an hour of your time trying to achieve and objective goal; just to be met with the unreliability of the game and realize you just wasted your time, and probably more than likely will be significantly dropped in the rankings. Not too mention all off the resources and time spent to train and build your forces before you even get to the battle which more than likely will be incorrectly recorded and evaluated. For example, my last attack I destroyed 88% of the base; yet it recorded at 0% and I lost. Not only did I lose the battle, I lost the points I would have received towards the event objectives, nor were the required building objectives counted for. So now I have to repair and retrain everything which was lost; in a battle that apparently never took place according to the game. Disney, one of the sixth largest corporations on the planet probably, and they can't even make a game with reliability. *original review* There are some major glitches. Several times already, I've had battle logs that say I've lost while replays show different. The last one for example was pretty upsetting; my base was only attacked by 8 deployments who didn't even knock down one of my two shield generators. Definitely didn't take out my headquarters. Replay showed I barely received 14% damage, while battle log says I lost with 54% damage. With only being attacked by 8 deployments, while all of my reinforcements where still alive and standing at the end of the battle; and attackers deployments all dead? Connectivity shouldn't have anything to do with this issue like support says; when technically I wasn't even playing nor had the app open during the time of this specific attack. Something is being improperly rendered on the game server side obviously. The game is fun and I love the concept though, don't get me wrong there.

I really love this game and would really like new heroes or vehicles from the new movies. If you do add more heroes I would want it to be easy accessible to lose level people like earning them though events or unlocking a hero at like level 7 of the hero command because there isn’t an unlock there. Please read this and I hope new heroes are added like Kyle ren or emperor palpating for the empire and maybe Rey and you for the rebellion.

This is a game I would recommend to anyone it is addicting,fun,and exiting. For anyone who is thinking about getting this game you should.It s always fun and one of my favorites.

I’ve been playing this game off and on and while playing I’ve noticed the upgrading times. When I first started playing this game the upgrade times were relatively short but as I progressively got further into the game the upgrade times got so much longer that it makes the game no fun to play. For example a level 3 alloy factory takes 12 hours! In other games similar to this the time is like 1 to 2 hours. If this game is to be fun to play this issue needs to definitely be fixed.