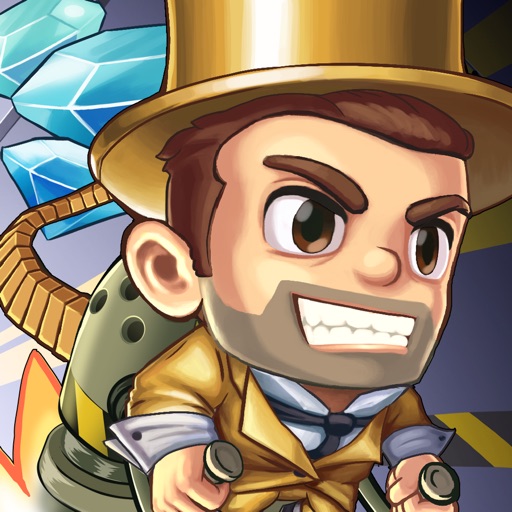 You're going for a ride - from the creators of FRUIT NINJA! Now updated to support the beautiful Retina display for the new iPad! 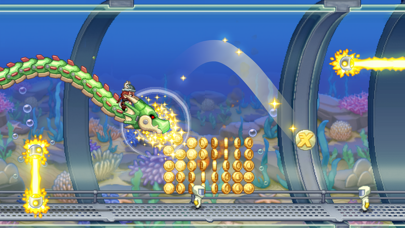 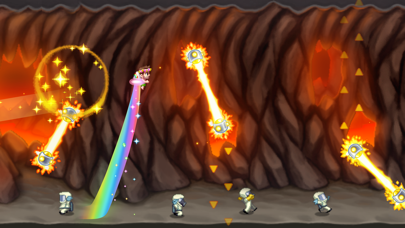 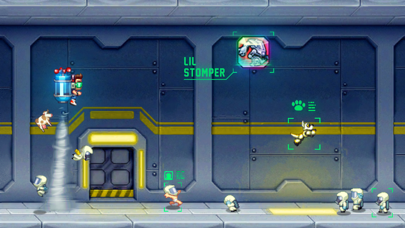 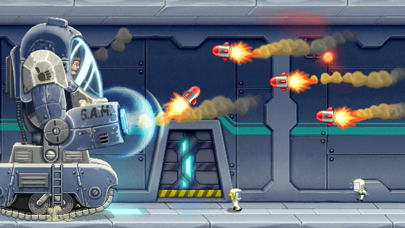 Suit up with a selection of the coolest jetpacks ever made and take to the skies as Barry Steakfries, the lovable hero on a one-way trip to adventure! From the creators of the worldwide phenomenon Fruit Ninja comes the action-packed Jetpack Joyride, Halfbrick's most anticipated iPhone game ever!

"This is seriously my favorite iPhone game right now. I don't care if you have to go donate blood to afford it, do what you have to do." -- Touch Arcade

"Jetpack Joyride is, quite simply, an amazing game." -- IntoMobile

"Like all the best mobile games, Jetpack Joyride is criminally simple." -- Kotaku

"We are already blown away. Halfbrick looks like they have another hit on their hands." -- AppAdvice

“A miracle, by all accounts.” - PocketGamer

Join Barry as he breaks in to a secret laboratory to commandeer the experimental jetpacks from the clutches of science evildoers. After lift-off, simply touch the screen to ascend and release to descend, raining bullets, bubbles, rainbows and lasers downwards as you fly towards higher and higher scores!

You'll start off with the legendary Machine Gun Jetpack to scatter the evil scientists, but throughout each game you'll collect coins and complete missions to earn cash and buy new gear in The Stash! Pick your favorite jetpack, snazzy outfit and stock up on items then get back out there for more action!

Keen reflexes are your best weapon to avoid the obstacles in your path. These include lasers, electricity fields and even guided missiles, but thankfully this is a top secret lab - there will be even more goodies to pick up and help Barry along the way. Stay out of harm and you'll reach massive scores, unlock Achievements and beat your friends on the online leaderboards!

Get a boost of speed and power using the Lil' Stomper, Profit Bird and Crazy Freaking Teleporter, just a selection of the vehicles pickups available - all playable with one touch controls. You can even splash out and upgrade the vehicles with coin magnets or shiny gold plating for that bonus style factor!

Stay alive, get funky and lose yourself in Jetpack Joyride. There's so much to see and do, all the time in the world and more than enough jetpacks! As always, Barry Steakfries will provide!

This game may contain:

- The ability to purchase optional content using real money. You can disable in-app purchases in the settings menu of your device.
- Promotional material for Halfbrick products and trusted business partners.
- Links to external social networking sites intended for users over the age of 13.
- Direct links to the internet which may open the default web browser on your device.

Wiz views
the wizard of reviews

Love this game. But it can be addicting and hard to put down. And the ads aren’t as intrusive as from other games.

Customer service is great. Developers are very attentive. 👍 it would be nice to see a Badge with a sash or different color when you start to get duplicates. Just a thought. Thanks for a great game.

I’ve been playing this game for years and it’s great, recently I had a issue that my game was crashing and I was pretty sad about it but halfbrick fixed it! It’s one of the best games that I’ve played of all time and it’s worth downloading it

So this bling event isn’t a event where you collect to earn a prize? Instead you have to buy it from the store? Why is that?

This is the best game ever

The audio is not working and the last time I played this,there were events such as the bling it on, the cut and run(an event celebrating the Anniversary of fruit ninja also made by Halfbrick), Zappy bird, and pirate pillage. Please fix the audio and add the said events. I will give it three stars if you do. Disclaimer: I didn’t actually play through the pirate pillage or zappy bird events or even the more seasonal events, but I still want them in a future update.(Doesn’t even have to be the next update) Update: The audio actually was working, but it was just muted. Please add the aforementioned events in a future update. Update 2: have you considered adding event-exclusive final spin prizes?(e.g. tokens x4, tokens x6, tokens x8, tokens x10, tokens x12, tokens x14, tokens x16, etc) Update 3: thank you for adding the events I requested to be added. Update: When I opened the app, there was no tab for the Bling it on event. Pretty Pleeeeeeeeeeeeeeeeeeeeeease fix this as soon as possible.

Time for the rest of the power-ups
Run800mtrs

Been waiting for years to have the rest of the power ups. Still 2 spots left. Awesome game. Been playing for years. Worth buying something to get rid of ads. Haven’t dealt with ads ever since. Did like it when you use coins to purchase lives, head starts, and bombs. Not that I need or use them though!

This game is still one of the best games and I played when I was 4. I’m 11 now