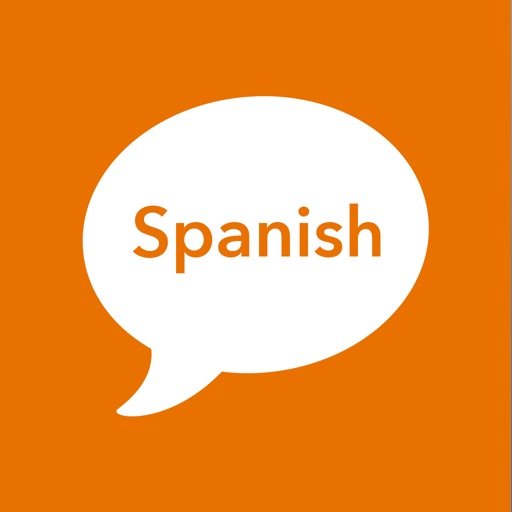 Spanish phrases and vocab at your side! And with Audio! 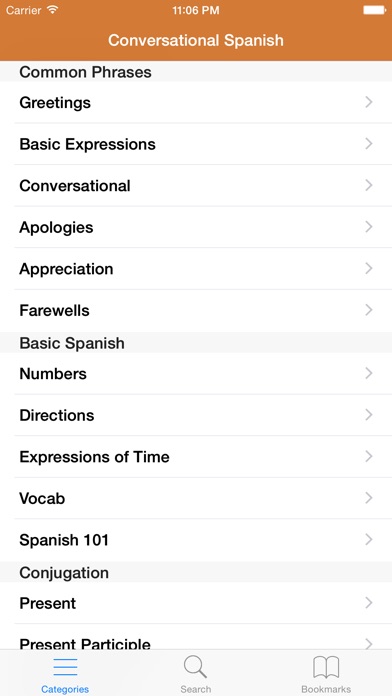 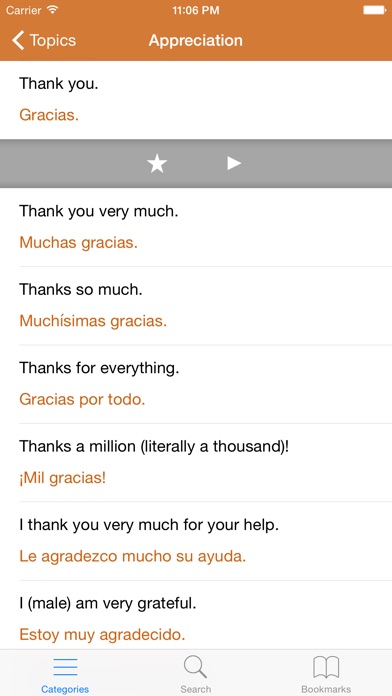 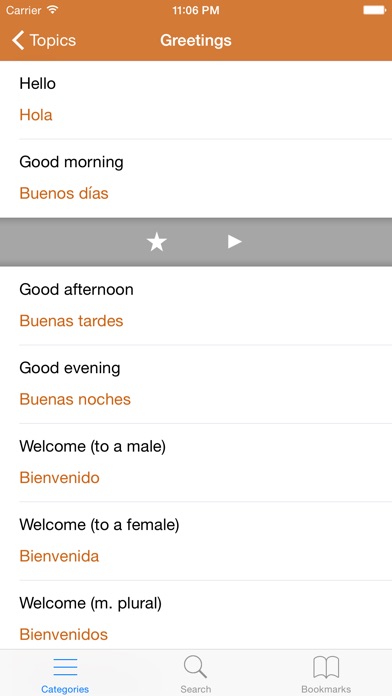 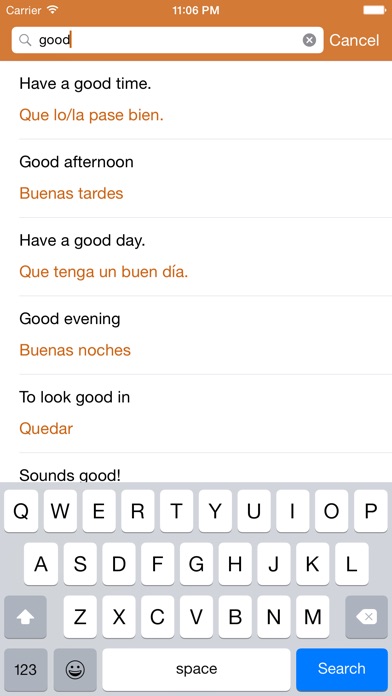 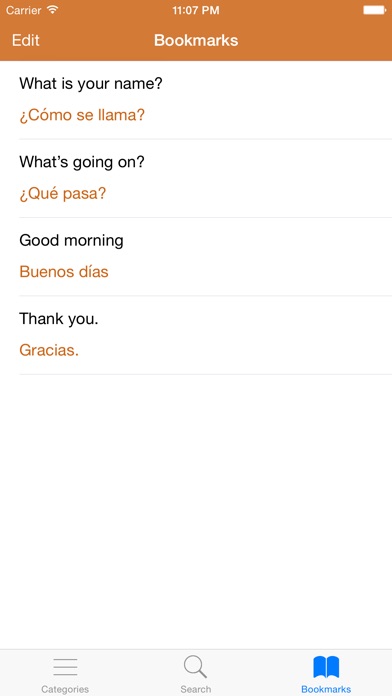 Complete phrases with audio to help with pronunciation make this the perfect app to anyone visiting a Spanish speaking country or find themselves needing to communicate with Spanish speakers.

This app is also great for introductory and intermediate students of Spanish, at the high school or college level, who have a fundamental grasp of the language but would like to enhance their experience outside the classroom. Whether you're at a restaurant, on a train, or at an office - this is an easy way to learn important basics that will impress your friends, boss, and your teachers.

This app features over 800 words and phrases and over 28 different categories including:
Numbers
Directions
Expressions of time
Greetings
Farewells
Appreciation
Apologies
Pronouns
Questions stems
and much more!

The best Spanish phrases app out there, I love it!

Good app, easy to use
gigq

Wish I had this when I traveled to Ecuador last year.

I have purchased three or four Spanish apps in the past few months and this one by far takes the cake . The conjugation tables are an enormous help . This app has really helped me become more confident in my ability to communicate coherently in Spanish . My only real suggestion is to add a Spanish - English dictionary in future updates. As well as, of course, more and more phrases . Great Job Batoul Apps !!!

Just to have the verb tables in your pocket makes this worth the 99 cents. It has the tables for 12 verb tenses and they are very easy to use. It also has 6 sections of common phrases (greetings, basic expressions, conversational, apologies, appreciation and farewells) with quite a few phrases in each of them (probably from 15 to about 50 depending on category) and it has 5 categories of "basic spanish" (numbers, directions, time, vocab and spanish 101) Again with quite a few listings in each category. Totally worth the money, easy to use but if you have an intermediate level of spanish or above this may not be worth it for you. But for newbies, beginners and lower intermediates i would suggest getting this.

Surprise
two places at once

Much better than I expected. Fast and clear.

I recommend this app for the beginning learner who wants to practice pronunciation, and at the same time memorize a few hundred of the most common words and phrases in Spanish. I do not recommend this app as a phrasebook for the traveler who is not trying to learn Spanish, but wants an easy reference to common phrases used for ordering food, making reservations, and so forth. It doesn't contain that kind of material. In that respect, its characterization as a phrasebook isn't really accurate. The amount of content is a bit thin at this time. Perhaps that's because this is the first version, and more material will be added as the app is improved. I would have given it the top rating if it contained significantly more content. The audio offers high recording quality and exemplary Latin American pronunciation. A North American learner should probably focus on Latin American pronunciation. Spanish is very regular in its pronunciation and spelling. Learning the pronunciation system and rules is key to reaching an intermediate level. The choice of content is too conservative and formal. The words and phrases are definitely not street Spanish, and will not be much help in understanding how people speak Spanish in everyday situations. Nevertheless, there is value to studying formal Spanish, to learning word choices for formal situations. One way to improve the app would be to add more phrases and expressions from everyday Spanish. A few of the translations are too literal or do not really reflect how people speak English today. The creators of this app are obviously native Spanish speakers, and they occasionally get the English wrong. For example, I would translate the expression "como no" not as "naturally" but as "why not?" or "of course!". A better translation for "maybe" would be "quizas." For "en punto" I would say "exactly," not "on the dot" (which is a literal translation). Nobody actually says "on the dot" in English. In addition to some basic phrasebook sentences and word lists, the app contains some reference material such as verb conjugations. This treatment of grammar is too brief, so it simply shouldn't be a part of this app. The app could be improved by removing this material and replacing it with other content. The app should not try to be a comprehensive reference. The developers should focus instead on what the app does well, on teaching the Spanish pronunciation system for basic word lists and phrases.

If I could give this app 10 stars I would. It's exactly what I was looking for and it didn't cost me next weeks groceries! I was looking for a app to help me continue teaching my six year old since he had already learned his numbers and colors in Spanish and he was ready to learn more. I couldn't find anything that I wanted on the app store until I saw this app. For learning Spanish, this one is the best app I have found! Good job developers!

On the dot...
Cedar Park Tx

I have to respectfully disagree with another review. We say "on the dot" all the time in Austin. "We are leaving at 8:00 on the dot, so don't be late!" In fact, amazingly ironically, I had just taken an "On the Dot" taxi from DFW airport to my hotel and kicked back looking for a new app when I read these reviews. I'm an intermediate level speaker and I think this is a great tool for practicing pronunciation and small talk. I found that I have become more relaxed and more natural sounding by practicing such phases - having them on the tip of my tongue ready to fire off. (just learning to say 'este...' instead of 'um' 'well' 'uh' when struggling for a word is invaluable for buying time and still sounding fluent. <just an example. That point isnt in the app>). The voices are clear and natural sounding. The grammer points have served me as a convenient refresher. I dont think it will be very helpful to someone not familiar already with the grammer - the treatment is too simple. I agree that it is begging for more content, especially given all the free resouces available. But really, the app store is about the only place left where you can buy something useful for under a buck - I'm hard pressed to be too critical. For five bucks I have five spanish apps that complement each other, filling in the gaps. I think you'll find this app useful too.

Great for a beginner.
Thehollybadger

I read Tina of reviews on tons of Spanish apps before finding one that seemed somewhat useful for (conversational) Spanish! So many apps had poor reviews on even the most basic of spanish apps so I was happy to find an accurate phrase book with spoken words that sound clear and really help with annunciation. I would really love to see more grammar and vocab (versus mostly phrases)! Maybe an update or new app! This interface is great too.