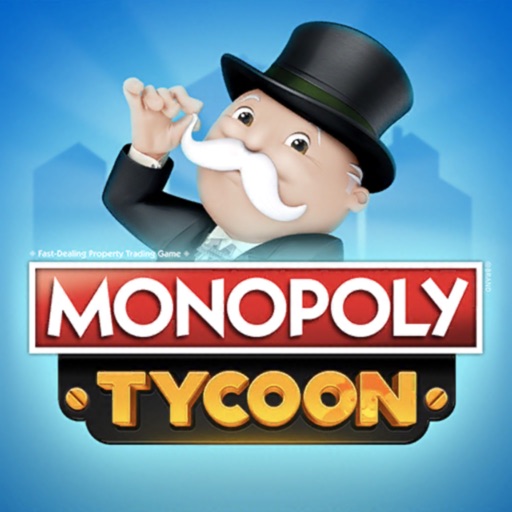 Welcome to the MONOPOLY Tycoon game! You have been selected by Mr. MONOPOLY to show your full potential and become the ultimate real estate tycoon! Are you up to the challenge? The citizens are waiting for you! 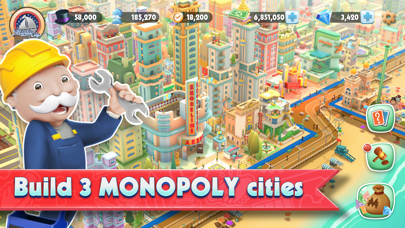 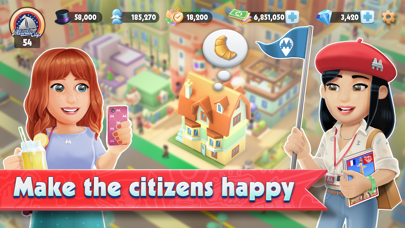 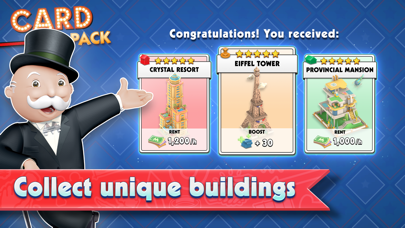 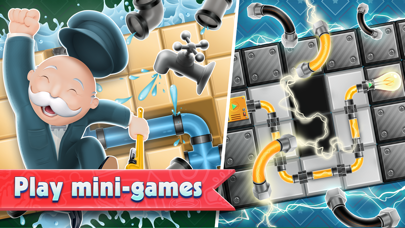 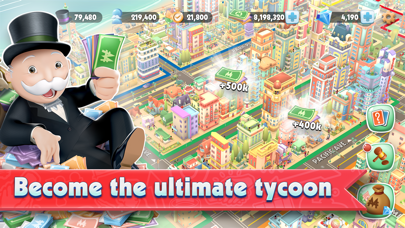 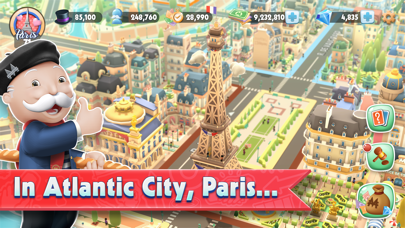 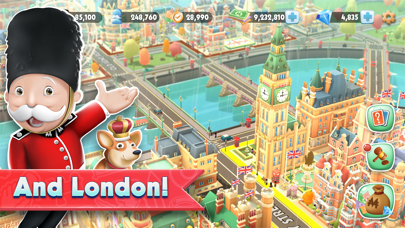 YOUR MONOPOLY BOARDS COME ALIVE
The traditional flat board has become a thriving 3D city, complete with its particular buildings, live traffic and endearing citizens attending their business or enjoying the city you are building for them. Each city is familiar yet unique, with its own character and architectural style as well as funny quirks. Unlock and grow each city to make it even more beautiful while ensuring its inhabitants are the happiest in the world - happy citizens are the best ingredients to make cities prosperous!

BUY PROPERTIES, BUILD HOUSES AND HOTELS, COLLECT RENT AND GET RICH
This is a MONOPOLY game, and true to its name it gives you the opportunity to buy properties and populate them with a wide variety of buildings: houses, hotels, even businesses! Follow Mr. MONOPOLY’s advice, make wise investments, build the city, and generate ever more rent in the process.
Each city comes with its own wide variety of buildings - will you manage to own them all, including the super-rare landmarks?
As a real estate visionary, will you be able to match the right buildings to optimize the happiness of your citizens and therefore the speed at which each neighborhood will generate cash?

COMPLETE MISSIONS AND HELP INHABITANTS ACHIEVE THEIR DREAMS
Each city gives you the opportunity to meet a number of local citizens – they are cute, quirky, funny, and in dire need of your help to revive their city! Come and meet Olivia the politician or Hubert the star chef!

MAKE GREAT DEALS IN THE AUCTION HOUSE TO GAIN REAL ESTATE POWER
There is no such thing as a free lunch… If you really want a property and establish a local monopoly, you will have to compete against other players - play well and you will get the best properties at the lowest prices, but if you bid too low these properties will make a competitor happy.

A MONOPOLY GAME LIKE YOU’VE NEVER SEEN BEFORE
All the iconic elements of the traditional MONOPOLY board game are present, but transposed and adapted to this fast-paced race to become the wealthiest person on Earth. Come and see for yourself!

COMPLETE ALL CITIES AND BECOME THE ULTIMATE REAL ESTATE TYCOON!
With great wealth comes great power - in your case, the power to expand to new horizons as you unlock new cities. So many investments to consider, so many properties and buildings to own!

The MONOPOLY Tycoon game is free to play, though some in-game items can also be purchased for real money.

*Internet connection is required to play the game*
The MONOPOLY name and logo, the distinctive design of the game board, the four corner squares, the MR. MONOPOLY name and character, as well as each of the distinctive elements of board and playing pieces are trademarks of Hasbro for its property trading game and game equipment {and are used with permission}.
© 1935, 2022 Hasbro. All Rights Reserved.

I just downloaded the game and when I go on it it’s fine loading but then it just freezes the game when it’s trying to finish loading and won’t do anything else.

Can’t play the game since the last updated.(edited)
Frank7117

Thank you for your response, I updated my rate to 5 stars because the game is really good, and after I communicated with the developers, they were kind enough to write me back and helped me to get the game working again. Thank you

Just started playing and I’m already hooked. Never did like city building games but there’s something different about monopoly tycoon. There’s so many references to the board game I guess they kinda went overboard with it, no pun intended. It’s a good time killer and is actually pretty fun so try it out and don’t trust those negative reviews they don’t know what they’re talking about.

Can’t get it to load past title screen
Mydadnme

I can’t even get the app to load to even try the app I have a good Wi-Fi!!! That’s why I’m giving it one star

I love this game!
Eac1

This game is very unique in the fact that legitimate strategy is needed to fulfil needs as well as being very free to play friendly. None of that item crafting gimmick that every other game has.

I grew up playing Monopoly. Thank you for making a great game. I know it’s new, but looking forward to see what you will do with the game.

Boring! Could have been great.
review helper2.0

I was so excited to start playing this game! Nice graphics gets it one star. Monopoly themed gives it another. After starting to play, I realized it was super repetitive and got boring quickly. You can’t really do much except put houses down. I wish it was more simple of a design and more customized with like little people walking around the town or something idk. Also, the auction house is absolute trash. So computer generated of people.DELETE! :)