THE WORLD’S MOST POPULAR MOBILE WORD GAME is better and more clever than ever with all new game modes built for the word player in all of us. Beautifully and intelligently redesigned, Words With Friends 2 is teeming with more ways to challenge your friends and your brain than ever before. 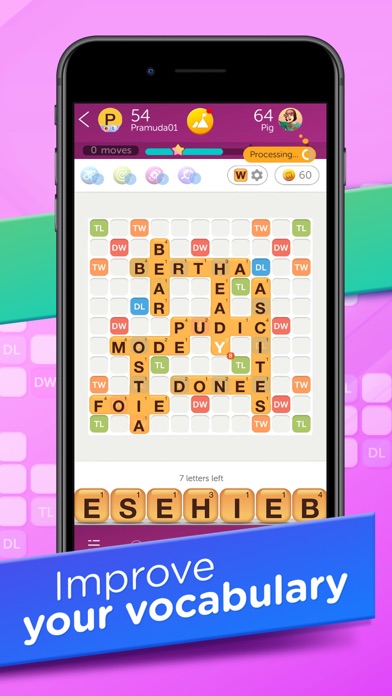 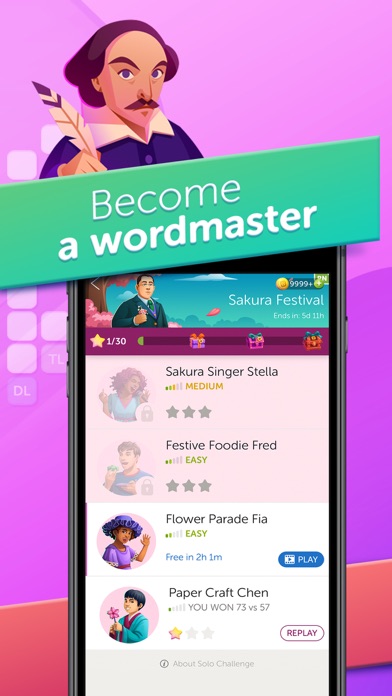 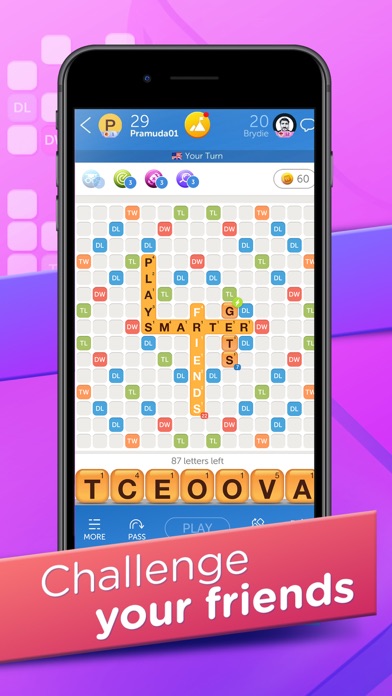 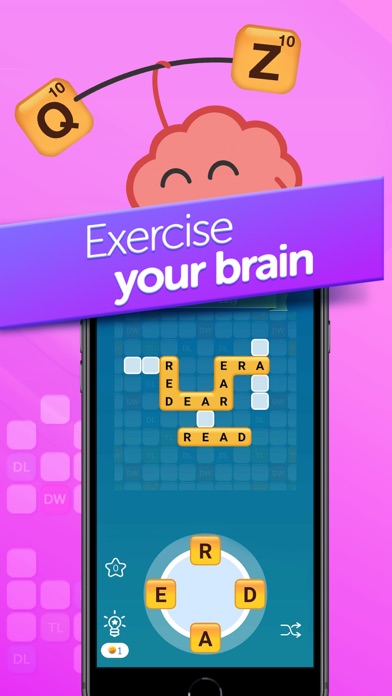 Want to boost your word game? Play against fictional characters in NEW Solo Challenge events, updated with new themes and opponents twice a month. Got a competitive streak? Jump in for a fast-paced team match to test your rapid word building skills in the NEW Lightning Round.

The classic one-on-one gameplay you love is here too and now you can earn unique themed badges for completing weekly challenges and scoring big against your friends. Words With Friends 2 backs up your gameplay by pulling in all your past games, friends and progress from previous versions. There’s nothing to lose, and more fun to gain!

Sometimes staying in touch is as simple as playing the perfect word. Download and play the NEW Words With Friends 2 today! May the Best Friend Win.™

CREATE A GAME
It all starts here. Challenge your Facebook friends and family members to a game or use Smart Match to find your perfect word puzzle opponent.

TRAIN IN SOLO CHALLENGE
Test and improve your word skills against themed WordMaster characters in NEW Solo Challenges events. Stay sharp, because as you move up the ladder, the WordMasters will get tougher to beat.

COMPETE IN LIGHTNING ROUND
Collaborative meets competitive gameplay in this new, fast team mode. Play on a team of up to 5 players, and face off in a match to score the most points first and win.

COLLECT UNIQUE BADGES
Play the weekly challenge and earn fun, themed badges that are different every week. Build the ultimate collection and display them proudly in your badge case.

ACCESS 50,000 NEW WORDS
Our biggest update to the Dictionary ever includes 50,000 new words, inspired by our players and pop culture.

Prizes need to be GREATER…?

The brilliance of this game is tarnished by the intense bombardment of ADVERTISEMENTS. Enough already ☹️

Impossible attempt to get help from help dept
reeree201

I’ve been trying for weeks to get help from help. I paid for premium, had it for a little while, but now up I’m back to basic game.

I have played the original for years. When 2 came out I dutifully downloaded it. It was overwhelming with suggestions and movement and lack of clarity. So I went back to the original. What am I missing when I just want to play? No leaderboard status needed.

Too many ads. Unplayable.
Makaelee

I have played this game on and off for 10 years and I have never seen it be bombarded with ads like it is now. It’s rediculous. Usually there’s an option to get rid of ads forever with a one time purchase, but 10$ for only 30 days of ad free? Come on. That’s rediculous. If this isn’t fixed I won’t be playing much longer.

The pop up telling about Collections pop up constantly..Really aggravating . No way to get rid of it unless you go through the sequence. Entirely not necessary being continuing constantly.

I had a bunch of great games going with my own picture and name (Valerie) . Somehow that disappeared and I can only seem to play under “zygauf” or whatever and have lost all my playing partners & I’m really ticked off!

Not up to date, doesn’t scan correctly, or can’t distinguish between some letters and others. Will not scan and solve automatically as stated on iPhone 13.

I downloaded this game feeling nostalgic and because I’ve been enjoying wordle. I was really excited, played my first move, then WHAM! a stupid long ad. After every single move. There’s no getting around it. You have to shut down the app and open it back up again to get it to stop. It’s the absolute worst. I’ll be deleting if after this game.

Would like the be able to play more games.yes