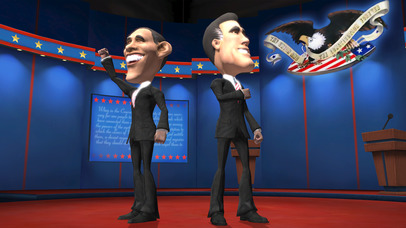 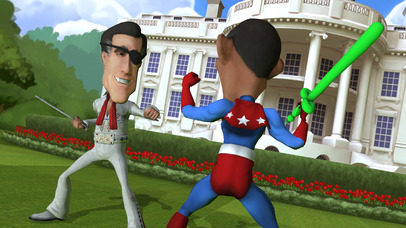 From the creators of the bestselling and award-winning Infinity Blade series, play as President Obama or Mitt Romney in a slapstick battle for the White House. Equip your candidate of choice with a variety of iconic American outfits, accessories and items. Use your skills to unlock score boosters, win votes and rack up the top score as you campaign for victory.

Who will win the presidency? On this campaign trail, both popularity and skill matter, so join now and VOTE!!!

NOTE:
- It is highly recommended that you upgrade your device to the latest iOS version
- Parents: you can turn off In-App purchasing in the iOS settings

Frustrated about taxation without representation or one sided policies? Beat your opponent on the debate stage (in this case comically, and with an all American hot dog while wearing cool shades). As others are writing, it would be fun to get an update with 2016 candidates. Do the weapons have different combo patterns like Infinity Blade? Can't quite tell...

You can't go wrong with playing a slapstick version of Infinity Blade 2 as the presidential candidates. Hopefully they add newer presidents eventually.

It fun but it does get boring

Infinity Blade (which is perfection incarnate, btw), except with caricature Obamas and Romneys fighting with microphones. 5 out of 5!

Fun to play. Hope they make it so you can play as more presidents

This app totally rocks. Best app in the whole history of the entire world get it!