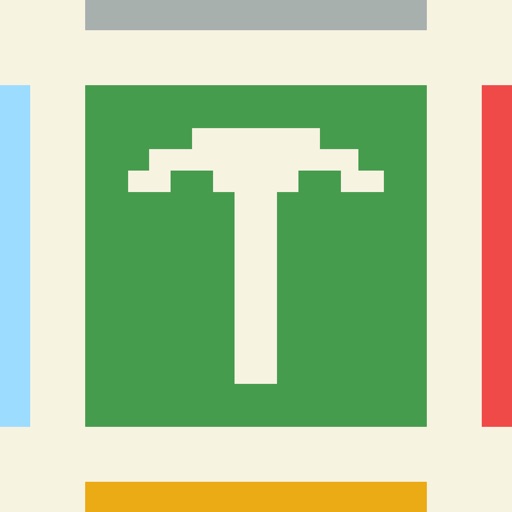 Earned 4 out of 5 stars on Touch Arcade!

Stencilsmith distills the essence of the adventure genre into a minimalistic puzzle game.

Swipe to move all cards at once. Slide stencils & cards together to craft tools, mine resources, earn XP, battle enemies and more! The object of Stencilsmith is to survive as long as you can to reach the highest level possible. What level can you reach? Compare your best with friends and players around the world!

Play casually for a quick fix or take it to the next level by making sure every move counts!

"If role-playing games take too long, and you don’t think Threes is violent enough, Stencilsmith might be your jam." -Cult of Mac

"Stencilsmith is a game that combines a ton of popular ideas, and uses them to create genuinely fun, complex gameplay. It's one part Threes, one part Minecraft, and one part trading card battle system." -MacNN

As an adventure game, Stencilsmith let’s players to grind levels, manage resources, upgrade weapons and plan how to attack enemies. At it’s core, Stencilsmith quenches the thirst all gamers have to earn XP & level up in a quest to beat their best score.

App Features
---------------
• 4 game modes, each require a different strategy
• Design Mode: Create, share & play with your own artwork
• Themes: Change the look of the game even while playing
• Record, save & share gameplay with ReplayKit
• Share your latest score & game board screenshot via Twitter & Facebook
• Universal app
• Game progress backs up using iCloud
• Game Center support with leaderboard and challenges
• Achievements
• Listen to your own music while playing
• Absolutely no In-App Purchases or ads!

Game Modes
----------------------
Endless: The original Stencilsmith game mode is now called "Endless". The game begins with three hearts. Use your wit and determination to reach the highest level possible before you run out of hearts or moves.

Time Attack: You have 30 seconds to reach the highest level you can! No hearts in this game mode, just swipe as furiously as you can to earn more time by defeating enemies. The game is over when the clock reaches zero.

Kingsguard: Endless rules with a twist...protect the King! If he is attacked the game is over.

Three M: The game starts with three diamond swords AKA the Three Musketeers and absolutely no chance for another sword to be added to the board. Keep your Musketeers alive by unlocking chests with gems to increase their strength. The game is over when the last Musketeer is defeated. There are no hearts in this mode.

Changing my 2-star rating to a 5-star thanks to a dev response and some bug fixes. Amazing, truly unique game. I hope it eventually gets the attention and praise it deserves.

Instructions are easy to follow and challenging yet fun gameplay! 5 stars!

Easy to learn, difficult to master, clean interface, good music and sound. Loving it so far and though it may ultimately end up being shallow, the developer is preparing more content in future updates. Pick it up now for 99 cents, will easily get your money's worth.

This game seems like a gem —great graphic design, intuitive gameplay, and bona fide indie to boot. However, I've encountered a bug that renders it completely unplayable. Namely, stencils do not disappear after they are crafted. For example, if I combine a basic pickaxe stencil with an earth tile, it will produce an iron stencil with can be moved around accordingly; however, the images of both original stencils remain in the space that they were combined in, covering anything underneath and making it impossible to see. In just a few moves, the entire board is covered with these "ghost stencils", making a cluttered mess that hides all the stencils in play. Additionally, the developer is only reachable through social media, with no direct email available; this makes support mildly annoying, since I don't want to have to create a Twitter account or sign up with Facebook to report game malfunctions. As it stands, the app design is fantastic; however, the aforementioned bug is a killer. Because of this, I can't give this game the rating it deserves.

This game is a fun mix of dungeon and RPG elements played on a puzzle board similar to Threes. I wish I could play it sideways on my phone but other than that it's a great game.

This game is absolutely AMAZING! I'm addicted and can't get enough. It's challenging without being impossible. Great job by the developer of the app and I appreciate the last update.

Game for everyone
sonny1738

If you like strategy games then you'll enjoy this one. Challengingly addictive, you'll wanna keep playing. I recommend it to avid gamers.

A really solid, fun little game. Great for picking up and playing for a few minutes, and the different modes give it more depth if you want to go for longer sessions too. I dig the ability to customize the tile art too, though I do wish it allowed you to edit the ground and chest tiles. Otherwise, I can’t think of anything negative to say about it. Nice job 👍