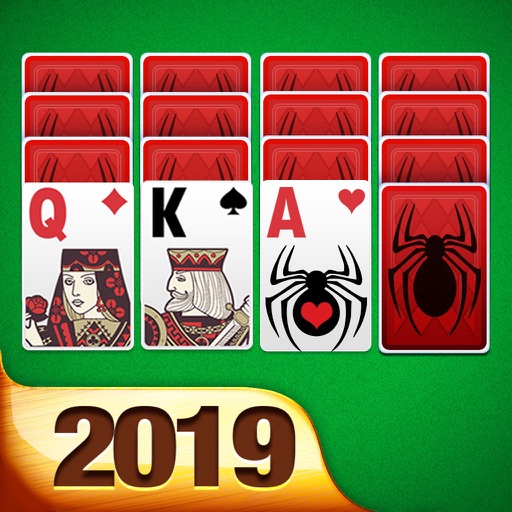 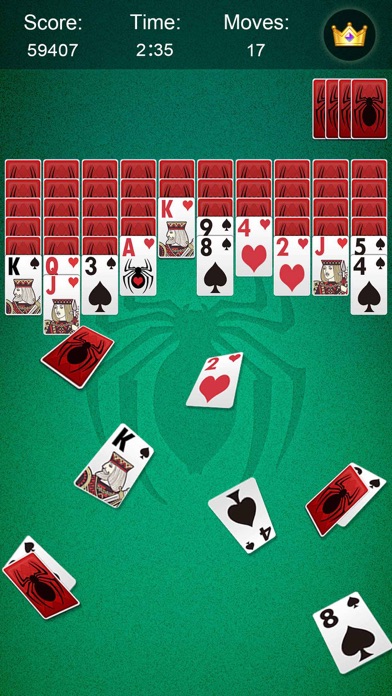 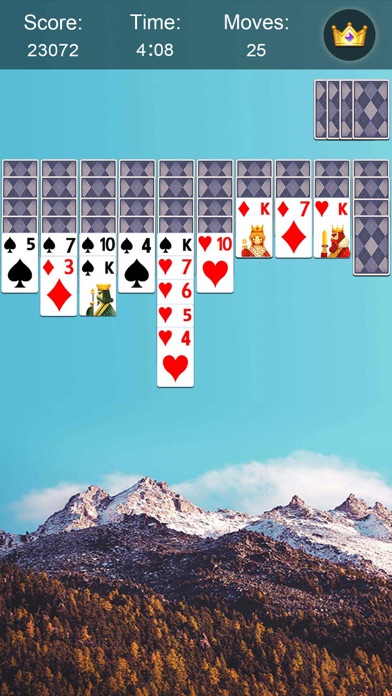 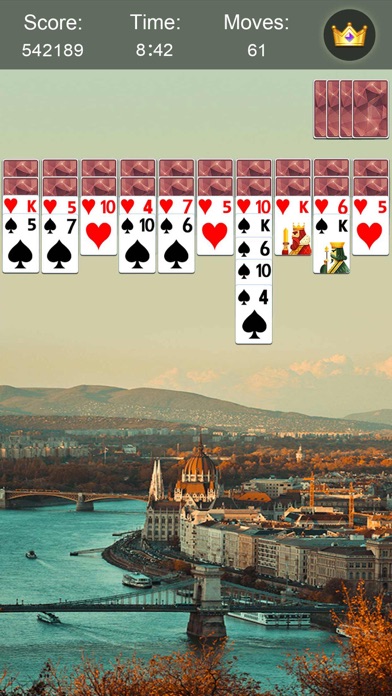 This game is sometimes called 'Spiderette' or 'Spiderwort', but it’s always a challenge that will puzzle your brain for hours of endless fun!
You're going to love this fun and exciting 'solitaire' card game!

How to play SPIDER MODE:
- THE PACK
* Two standard 52-card packs are used.
- OBJECT OF THE GAME
* The goal is to assemble 13 cards of a suit, in ascending sequence from ace through king, on top of a pile. Whenever a full suit of 13 cards is so assembled, it is lifted off and discarded from the game. The game is won if all eight suits are played out.
- THE DEAL
* Ten piles of five cards each are dealt by rows. The first four cards of each pile are dealt face down, the top cards face up.
- THE PLAY
* The top card of a pile may be moved, together with all face-up cards below it that follow in ascending suit and sequence.
* A sequence of available cards may be broken at any point by leaving some cards behind.
* A movable unit of cards may be placed either in a space or on a card of the next-higher rank to the bottom card of the unit, regardless of color or suit.
* A king can be moved only onto a space. Alternatively, the spaces may be filled with any movable unit.
* When all possible or desired moves come to a standstill, the player deals another row of ten cards face up. However, before such a deal may be made, all spaces must be filled. The final deal consists of only four cards, which are placed on the first four piles.

How to play SOLITAIRE MODE:
- One, move cards of a different color on top of a card that is one number higher.
- Two, move cards onto the foundation piles. Foundation piles are started with the ace in each suit and can be played on in sequence up to the king in each suit.
- Three, reveal a card from the deck. Cards can be revealed one at a time for easier game play or reveal every third card for a more challenge game.
- Continue to move cards around in these 3 ways until all cards are moved to the foundation piles (win) or there are no more moves to be made (lose).

Here is a brief description of what spider solitaire:
"Although Spider Solitaire hasn’t been around as long as the other varieties, it still has some history. The game got its name because a spider has eight legs and there are 8 discard piles that have to be filled and it is also true that the game is based on a similar Solitaire game called Scorpion. This game originated in 1949 and became a popular variety among players of Solitaire. "

Worst game ever
Love those movies

Don’t want finger pointing to row or cards I should move. There is no animated background. There is no reset. The ad is so cool, but the game that was downloaded was not in any way even close. Wish I could get it out of the cloud. WORSE game ever!

It turns into solitaire after the practice intro and idk how to get it back to spider solitaire.

Spider Solitaire 2020
was a lover

I want the old Spider Solitaire that I’m addicted to!!! I will quit playing, sadly. It was my go-to game ☹️

I hate that on IPAD I cannot rotate to landscape. Only portrait with the plug in on the bottom so cord is always bending and will break eventually,