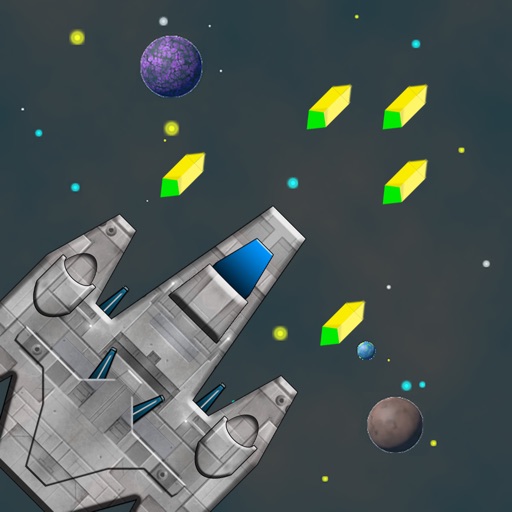 Destroy an infinite horde of enemy spaceships with the tap of your finger! Shooty Ships Clicker is an addicting clicker/idle/incremental game. It features an insane amount of depth, strategy, collectables, power-ups, achievements, and of course, tapping.

Set in the infinite vacuum of space, begin the game with just one weak ship, but quickly tap your way to an infinite amount of wealth, power, and numerous ally ships to aid you in your efforts. When the game slows down, Prestige to reset your game for a huge reward. Use your reward to collect Power Cards that give powerful bonuses and allow you to progress further and quicker than before.

Features:
- Infinite gameplay. Constantly progress further and further on each play-through!
- Offline progress! No internet connection required, and continue earning coins when the game is closed.
- 30 unique consumable Power Cards to collect and use against the enemy.
- 105 unique permanent Power Cards that effect and benefit you in every aspect of the game.
- Open Power Packs for an exciting randomized reward of Power Cards.
- Traverse through asteroid fields and destroy any in your path for bonus resources!
- Collect shooting stars for useful rewards.
- Work your way up to owning all 20 ally ships, and let them play for you!
- Each ship unlocks powerful bonus skills as you level them up.
- Unique gameplay on each Prestige. Your ships' bonus skills are randomized on every play-through, giving you a slightly different experience and strategy each time.
- Prestige for a huge reward, allowing you to push further next time.
- Strive to complete achievements to earn huge rewards.
- Fun, space-themed graphics.
- Nice sounds and music.

Shooty Ships Clicker is sure to keep you entertained and antsy to push further for that next Prestige. Enjoy your tapping!

Great game, but could be better
Timl1775

I've had a lot of fun playing this game, but it's becoming tedious to go any further. I'm at the point now where every prestige nets me over a million gems and it takes forever to spend them all; it would be nice to be able to spend gems in bulk. Also, you get to a point where the ships you hire are worthless and all you need to upgrade is Galactica and use Pulse Cannon. It could use some balancing... Other than that, I haven't had any problems with any bugs, and it's a great game.

Good mix of sort-of-arcade and incremental. I think it does need a way to buy multiple packs at a time, because the purchase animation makes spending the prestige currency very tedious. Select the pack you want, wait a second for the animation to play, hit back, scroll to the pack you want, repeat. Just prestiged with three million gems after getting to wave 1300. Figuring an average of three seconds to buy the 2500 card pack, that’s a solid hour of nonstop buying. There’s an achievement for hitting wave 2000, and it probably requires ten hours or more of doing nothing but buying upgrades. ? Once you’ve hit wave 1000 you’re effectively done, which is fine really, because you’ve got a lot of playtime to get there.

Been playing for a while and I rather enjoy it. Quick suggestion: add “total damage per second”