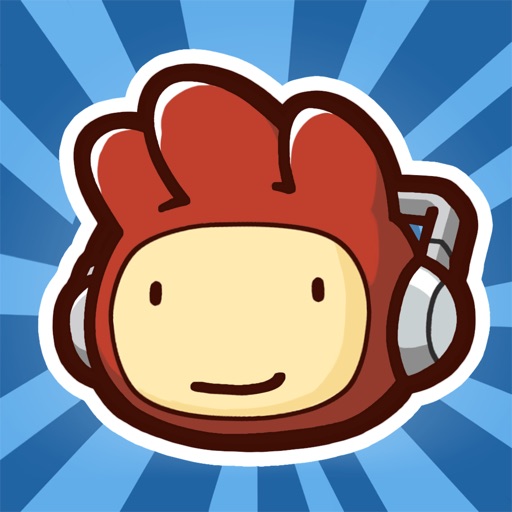 ►►Scribblenauts Remix now has over 5 million players! Get it now!.◄◄ 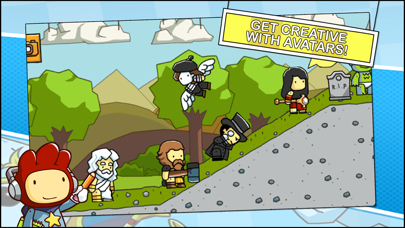 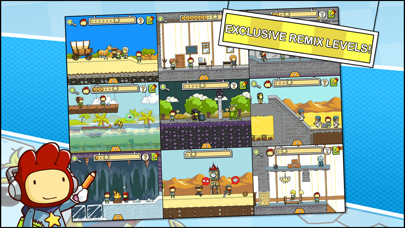 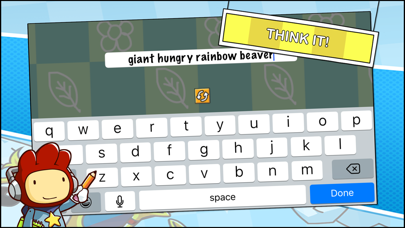 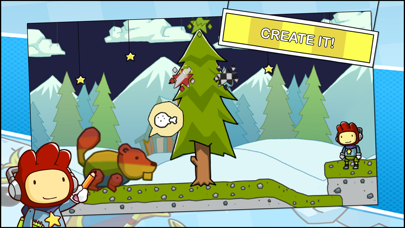 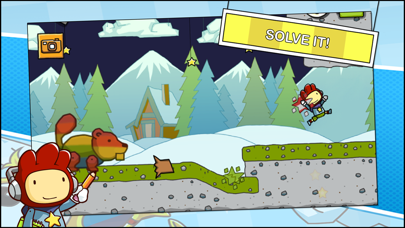 ►►If you purchased the World Pass or Avatars and can't find them after the update, just use the “Restore DLC” button in Options to get them back - you will NOT be charged for them again! ◄◄

THINK IT! CREATE IT! SOLVE IT! The award-winning, best-selling video game is now available for the iPhone, iPod touch and iPad.

Help Maxwell acquire the Starite by creating any object, bringing it to life and using it to solve each challenge.

Let your imagination run wild in this groundbreaking puzzle game. Summon to life a ‘colossal, winged car’ or a ‘shy, frost-breathing, robotic hippopotamus’! If you can think it, you can create it.

It’s the perfect game for the casual player looking for fun and extensive replay with unlimited solutions and different outcomes. Or, the Scribblenauts fan wanting the complete Maxwell experience.

Whether you’re 8 or 80, the only limit is your imagination!

CLASSIC GAMEPLAY
50 levels to play! Includes 40 of the most popular levels from Scribblenauts and Super Scribblenauts plus 10 original levels exclusive to Remix.
WORLD PASS
Purchase a World Pass and receive all current and future world expansions - 90 extra levels and counting! If you previously purchased a world expansion, you’re automatically upgraded to a World Pass and all future worlds will now automatically appear in your game for free.

PLAYABLE AVATARS
Re-live Scribblenauts by playing as a different character from in the game. Try out the feature with the free Lifeguard and God avatars!

SCRIBBLE SPEAK – EXCLUSIVELY FOR SIRI ENABLED DEVICES
Use the keyboard microphone icon to create objects using only your voice!

UNLIMITED FUN
Enter the Playground to create objects to your heart’s content, playing and interacting in a true sandbox!

GOLD CROWNING LEVELS
Engage in endless replayability (and earn a Gold Crown for your troubles!) by solving a puzzle multiple times using different words.
PLAY ON MULTIPLE DEVICES
Use iCloud to seamlessly switch between the iPad, iPhone and iPod touch without ever having to restart your game.

INNOVATIVE USER INTERFACE
Use the “shake to undo” function to remove created objects simply by shaking your Apple device.

CREATE AND SHARE
Use Game Center to check out the leaderboard to see how your score ranks and to compare game achievements with friends. You can also post game statistics to your Facebook and Twitter profiles.

GIFT THE APP
Give the gift of Maxwell to your friends and family!

Create what you want and see what happens!

This was the first scribblenauts game I’ve ever played, and it’s awesome! I had discovered it in a YouTube video called “Pinksheep in a game?!” Made by a YouTuber named Purple shep. Check out his channel. Anyway, playing scribblenauts remix was an awesome experience. And I’m still playing it today. Thank you creator, for making this game :)))))

No sound after the latest iOS update.

It,s no update for this app, it,s not good on iphone pro screen !

This is a Con-Job, Unlimited is Better
Joshua D.

This Remix version of Scribblenauts is just manipulative I believe. You pay an initial purchase price and you do not receive the full game. If you want more money as a developer, then please just up the initial price. Nickel 'n' diming us with in-app purchases is seriously crooked and distasteful in my opinion. Not that acting shady has ever been an issue for most modern video game developers though, sadly. Trying to find scruples in today's game creators is as hard as trying to find authenticity or intelligence in the world of reality-television. If you enjoy the Scribblenauts series, I'd recommend the first iteration released, Scribblenauts Unlimited, over this lackluster version. Though, I don't actually see the first version on the App Store anymore. Which is most likely because the developer is aware that this version is far inferior to the first release. And they don't want to give anyone the option anymore to just pay one price for a good game. The fact that the original doesn't seem to be offered anymore just exemplifies my point about how crooked this company truly is I believe. Luckily I had already purchased Scribblenauts Unlimited in the past, so I'm still able to download the game. I feel bad other newcomers do not have that same option now. I'd say, though, if this is your first foray into the Scribblenauts series, that I just would not recommend Scribblenauts Remix at all. I believe all this poor iteration will do is leave you with a bad taste of what the IP is in this form. Whereas, I believe that earlier titles really could showcase the fun that was possible in these video games. So, again, this version is a hard pass for me and I regret that I spent any money here. It feels like a complete waste of money ultimately. If you happen to own a handheld Nintendo console/device, just buy one of the Scribblenauts games for that instead is what I'd recommend. Because what you end up with in Remix is a pathetic shame by an reasonable measure. I give this game two big thumbs down 👎🏻👎🏻.

The game was good...at first,I got the game at least I think 5 years ago?it was good the first two years but everything went downhill for that.it started getting boring.you would probably think that a paid game would be fun,well it’s not.in the game the only thing you do is put something in the text and get it.btw the game hasn’t had a update in year’s.

Don’t listen to the lady after this
u ouvi

Great Game, but it is a money grabber.
GHJNBVVGGYJNBVfFYYhHH

This game cost .99 cents so you’d think that you would get everything on it. But you don’t, instead you get one character and five levels, you have to pay eight dollars to get one pack of characters, and there are only four characters to each pack.The game is to confusing, because there are no tutorials or hints, so you are just walking around and people are running after you to get your help. You can’t help them because it does not say what they need.If you are a Christian, then this is not the best game for you, there are a few things that Christians do not want to see, and I advise you to read other reviews too, because different people have different point of views.If you have not seen it yet, then try out “Scribblenauts Unlimited”, it is a very good game. It is a great game for little kids who do not understand much, but I in middle school and would like my money back, please. After I downloaded this I could get a refund, it was at the very bottom of the page and after I tried out the game the button was gone, and I had only one cent left, and I had so many things that I could have bought.

Pls add the editor to mobile!
the cool game colector 2.0

I bought this game and I saw a lot of repeat levels from the DS and I found out that even though I paid for it, they want me to pay even more money for more levels. It’s a good game though

This game no longer works
Thiskidnamed