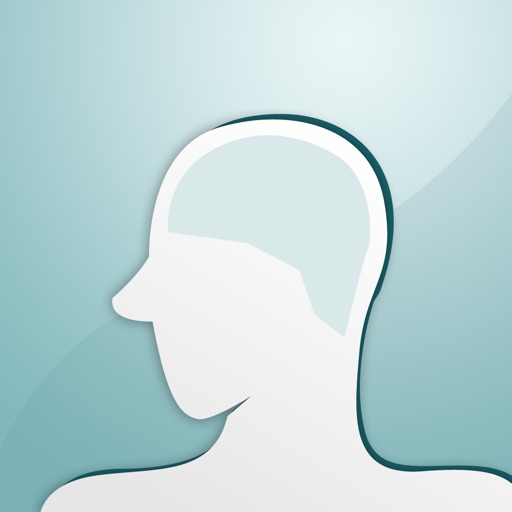 Keep track of your attacks of headache and symptoms and generates a report to be delivered to your doctor in order to cure your headache. 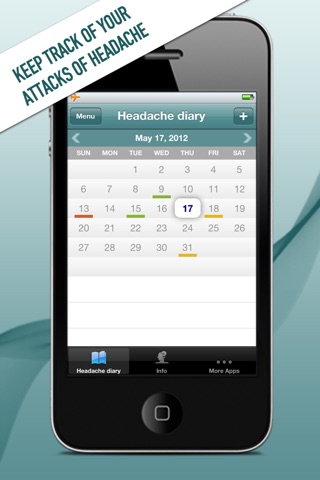 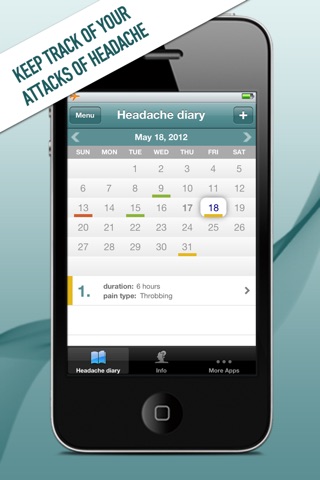 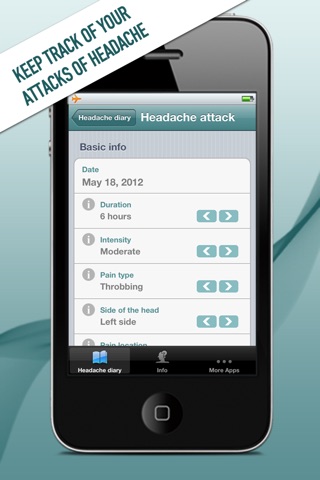 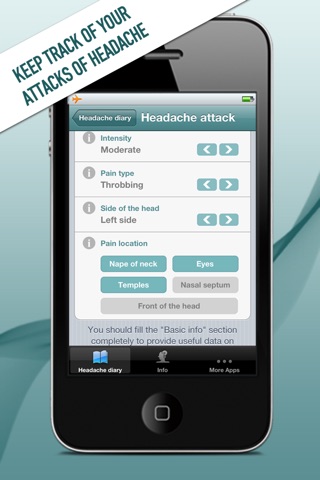 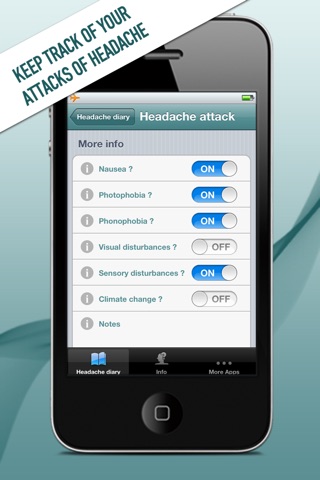 With My Headache Diary you will always have at hand a diary on which to register all the headache attacks, at any time and in a simple and fast manner.

Those who suffer from frequent attacks of headache knows that this condition often affects negatively the performance of normal daily activities.

The headache diary is a useful tool that all doctors tell patients to fill in order to find the causes of headaches, make a proper diagnosis and find the right treatment.

Instead of compile a paper headache diary, with this app you can register all the attacks of headaches, symptoms, intensity, duration and the various parameters that can be useful to your doctor for a diagnosis.

At the end you can generate a report for a specific month and send it by email so that you can print it and deliver it to your doctor.

MONTHLY VIEW: Looking at the calendar within the app will give you a global view of the frequency and intensity of attacks you have had in a specific month.

EASY TO USE: To enter an attack simply press a button and fill in the date of the attack. However, it is highly advisable to enter at least the most important parameters in order to provide useful info to your doctor to work on. All the parameters that you can enter for each attack are optional (except the date).

PARAMETERS: For every attack you can optionally fill in various parameters, including: duration, intensity, type of pain, location of pain, symptoms (nausea, sensitivity to light or sound, visual or sensory discomfort), conditions (menstrual cycle, pill, climate change) and a notes field where you can enter custom annotations.

REPORT GENERATION: At any time you can generate a report for the selected month and send it via email. You can print it and send it to yourself or directly to your doctor. Deliver the report to your doctor to help him make a correct diagnosis and find a cure for your headache.

INFORMATION RESOURCES: Within a small area of ​​the app you'll find information on what the headache is, how many people suffer from it, what are the main types of headache and the symptoms.

Love the calendar view and the report that is generated. It would be nice if you had an option to not print the fields set to off for the report. Easy to add new entries.

Great concept, wish there was an ad free version
Me123459

I love the concept but it has too many ads and I wish it were easier to navigate. It covers everything I wanted to track.

This is a semi-easy app; it took a bit to maneuver. I do have a problem finding my Mar. 31 day. I thought it was missing altogether, then it miraculously appeared, then when I went to look back a few days later, it was gone again.

Very handy for when I go see my neurologist. Love all the descriptions that describe my HA's to a T and the fact that I can add my own notes. Using it now to rule out HA causing factors... Love it

I found it not quite easy to use. Selecting age is hard because after you moved thumb away it changes value on grid. No way to select the type of headache . I wish there is a way to input medicine name since it asks for it

This app is easy to use albeit some of the functions are cumbersome, like the age slider and switching between details. There should be a way to input time of day as a minimum. You can add details in the notes section but the report will not easily show the frequency or repetition of those details, and I don't imagine that most doctors have time to read through a bunch of notes looking for possible triggers. It would be nice to have sections for things such as stress, foods eaten, odors - things of that nature. I would gladly pay for an app with these kinds of features added.

Great app- have been using it since October. Lately when I try to "generate monthly reports" it crashes the app. Wish that would be fixed but overall good app.

After using the app for 3 mos I'm enjoying the idea behind it, but it's a little frustrating to use. The scroll bar used to mark symptoms isn't user friendly, and once you've tapped your selection it doesn't minimize so you're stuck trying to tap randomly until you can move on to the next symptom. I also have yet to be able to successfully generate a report, I'll tap the button and the app just gives me a blank stare and doesn't do anything.

Not friendly, crashes on notes
rbeelee

Clumsy interface (esp the age bar) and once you start typing notes it crashes. Consistently.