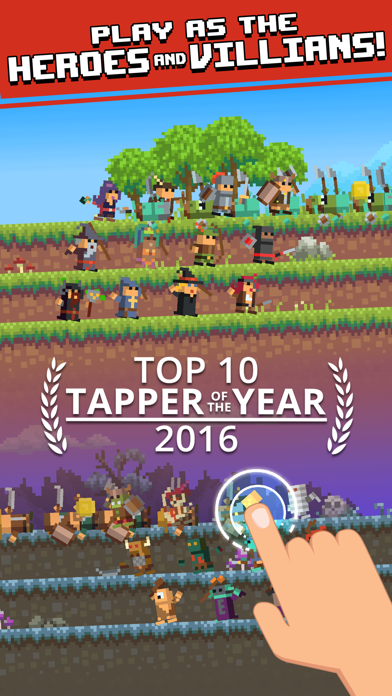 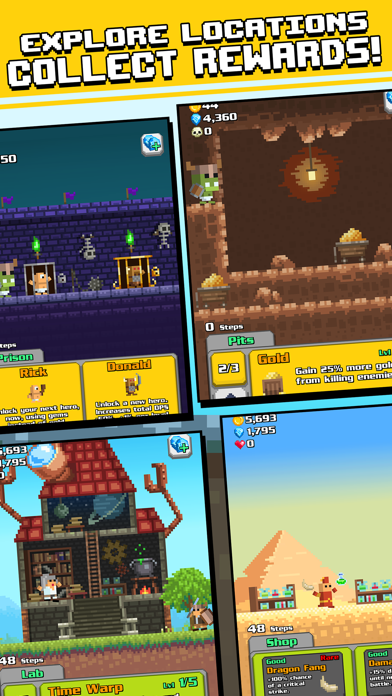 An idle game like no other; a great clash of good and evil, where you play on BOTH sides.

Follow Ivan as he sets off on his quest to kill a vicious orc known only as… Max. Recruit allies; the sarcastic Sabrina, the enthusiastic Lil Dan and the ever silent Meg. Choose game-changing perks. Unlock powerful spells to freeze your enemies or blow them to smithereens. Unlock masses of upgrades at your local lab or hire archers at the nearby barracks. Rank up, level up and upgrade to fight against the never ending stream of skeletons, orcs, goblins and bosses who want to eat you up… and then…

Swap. Play as the misunderstood Max, an Orc with a lot to prove. Put up with an older brother, an over-zealous mummy and an anxious cave troll. Visit swamps and wastelands, run your own gold mine full of human prisoners. Unlock powerful curses, purchase powerful items. Upgrade, rank up and battle endless waves of farmers, peasants, soldiers and bosses… and then…

Battle your armies. To the winner: lots of rewards, to the loser: less rewards. Use these rewards to improve your armies permanently, so that the next time through you’re even more powerful. Wow this circle is practically never-ending… you could play this game forever…

If you like idle games this is a must! If you don't, give it a try as you might be surprised.

If you've read this far well done, when you find a hermit be sure to use the code: WA4EVER!

Features
+Control two armies - each with distinct heroes (and villains), technologies, spells and upgrades.
+26 characters to unlock, all with funny (and not so funny) conversations as you play.
+Pretty retro graphics - travel from grassy forests to stark wastelands, icy planes to dank swamps.
+Earn millions, trillions, quintillions... even octodecillions!

I’ve played this game for quite a while after it launches, but then quit for a little bit. It is a lot of fun and had a solid progression system, but after a few prestige resets it started getting too repetitive. I have recently started playing some more on a regular basis and it is still pretty fun and a good idle time waster. I also really enjoy the silly banter the characters talk to each other. If you like idle progression games, give this a try.

The game is okay but I would like some more conversations. The game is addictive but it just keeps repeating over and over all the time when you prestige.

There isn’t any enemy variety and there should be some team abilities like in miitopia that I thought was a awesome detail.And there should be a WAR MACHINES like the bilista,catipalt,cannon,goloms,and lastly the legend told even to day the demon of the sky a dragon. Oh and more heroes and villains.Plus being able to buy or earn different weapons and armors for buffs and the armor would make your heroes/villains have more verity and to look cool.For example the swords would have strangeths and weakenesses.Like smaller swords would swing faster but do less damage or DPS,and heavier swords would do lots of damage but would take longer to swing.And if your lucky you can get weapons that have spells that could freeze enemies,or burn,splash damage,+5%gem chance,and if your wizard is a high enough level he could confuse enemies to attack there own team. Well this has been a fine dandy time but I have no more complaints for this game and add caricature interactions and friendship levels witch would effect your game play! Good bye all I’m out!!! Peace!

IF YOU PLAY THIS YOU WILL NEVER STOP

Great game kinda gets repetitive! But very good game should open to mmo or rpg kinda battles make it a different style than your typical idle game.