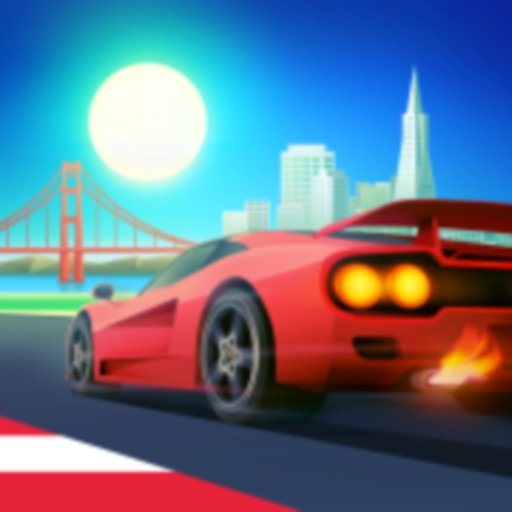 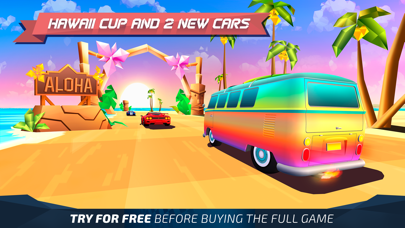 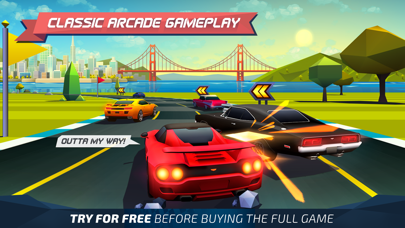 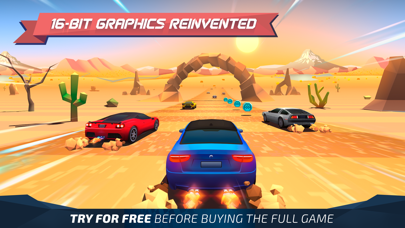 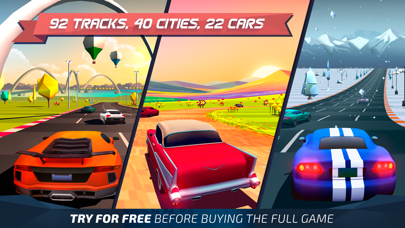 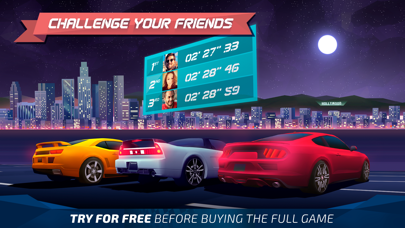 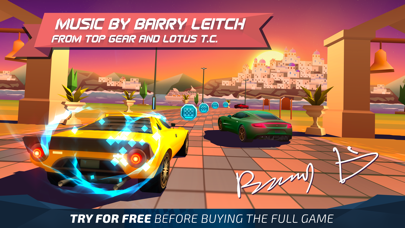 Horizon Chase is a racing game inspired in the great hits of the 80's and 90's: Out Run, Lotus Turbo Challenge, Top Gear (SNES), Rush, among others. Each curve and each lap in Horizon Chase recreates classic arcade gameplay and offers you unbound speed limits of fun. Full throttle on and enjoy!

• 16-BIT GRAPHICS REINVENTED
Horizon Chase brings back the graphic context of the 16-bit generation and creates a style that is inspired in the past without letting go of its contemporaneity. The apparent polygon and secondary color aesthetic accentuate the visual beauty of the game, resulting in a unique and harmonic atmosphere. You'll feel the retro soul of the game on a completely modern body.

• A TOUR THROUGH THE WORLD'S HORIZONS
Horizon Chase is a race around the world. With each new cup you'll pilot your car through extraordinary places, watching the sun setting, facing rain, snow, volcanic ashes and even severe sandstorms. Be it day or night each track takes place in beautiful postcards from across the world.

• BARRY LEITCH, SOUNDTRACK COMPOSER FROM LOTUS TC, TOP GEAR AND RUSH
Horizon Chase presents Barry Leitch, the musician behind the soundtracks of classic arcade racing games Lotus Turbo Challenge, Top Gear (SNES) and Rush. As you play the game, you'll be hypnotized by his charming tunes that compliment the graphical ecstasy of each horizon.

I bought this game and worked 3 days normally today it shows connection symbols trying to connect and at the end shows broken connection sign. Interenet is ok but game not working anymore. Reuqested refund.

They Broke the Restore Button
FOFS

I had already bought the game. Now it needs to be restored but the button doesn’t work. Please fix it.

I like this game very much and I have no issues with the game whatsoever. I was upset that I had to re-purchase the game a few days ago when I was unable to restore purchase. Since this bug is now addressed, would I be refunded the 2nd purchase? I regret asking the question in this fashion but I don’t know of another way to bring this to your attention.

The latest patch (17.0.1) has broken my (previously purchased) game. It has a button to restore previous purchase but it doesn't seem to do anything and the game won't let me access any of the unlocked tracks. I have tried to use the contact page but it is in Spanish.

The new patch broke the game and I lost all the tracks I unlocked. Also the restore purchase is broken too.

I bought the full game long ago and when I downloaded this beautiful game again on my phone, I have all my cars and the tracks I’ve completed unlocked like it should’ve been but when I tried to go to the next new track it didn’t do anything. I went to settings to restore the game but it didn’t do anything. I’ve waited and kept pressing on it but it didn’t work! And when it told me to “buy” the full game I pressed on it and almost immediately it showed me I had to pay 2.99 for it! I’ve already payed it! Please help me and do something pls!

On this version of the app, none of the races are accessible, so it no longer works. This app has turned into a brick.

Thanks for the new update
Kh'litsou

... combine to make a middling, half-and-half measure experience. Bringing together the late-‘80s/early-‘90s SEGA arcade racer genre, with Asphalt’s mile-a-second arcade, super-steering, thrill ride, this game is a flat, relatively slow-paced, Sunday sight-seeing cartoon, with faux nostalgia for those who’ve never played the original, arcade, SEGA machine, bumped up, a bit, with semi-modernized gameplay that neither brings back old memories of actual ‘80s, simulated 3D camp, nor does it whiten one’s knuckles, by not slamming that genre into the trick-filled, elite-precision, supersonic, hyper-arcade experience of either of the two far better games that it struggles to jigsaw together. Moreover, while both of the other games are free — with “A8” allowing you to watch some ads, for rewards — to go beyond the flimsy demo that this game offers *requires* payment, to fully experience its incredibly disappointing attempt to cash in on the joy of either, original game. Whereas Outrun takes you back to the whimsical glory days of late-‘80s/early-‘90s arcades — and Asphalt 8 has fine-tuning for what must be nearly 100 actual or concept, branded cars that handle and sound like their IRL counterparts — Horizon Chase has a relative handful of replicas that neither feel, nor sound like any particular car, but rather, some “hybrids” of IRL racers that, to justify the ⭐️ rating, look somewhat like super cars you’ve seen before. Moreover, it isn’t as exciting as either of the original games on which this game was obviously modeled, and —having gotten the PS4 version, from PS+, as a thrown-in replacement for PES Soccer, about which everyone had complained — in an unprecedented and horrible decision, by Sony — it is a one play game, which pushes against the current of sports games for which replay value is the most important aspect.