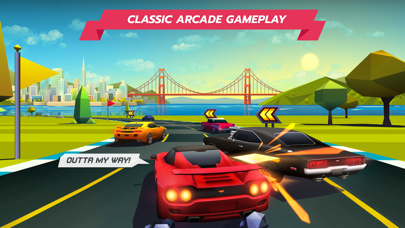 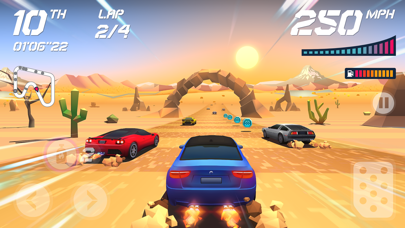 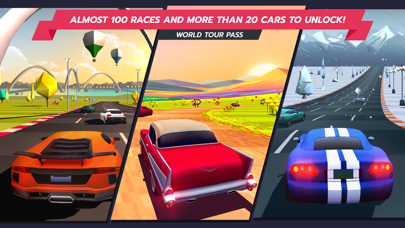 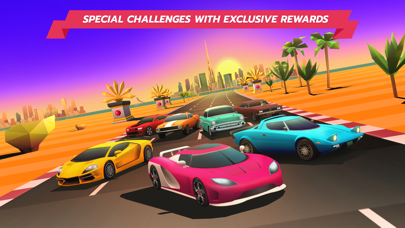 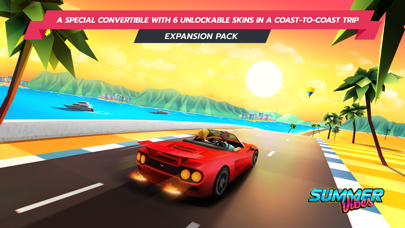 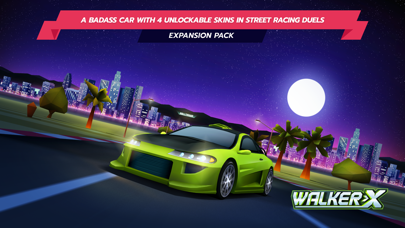 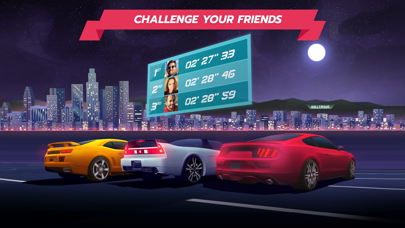 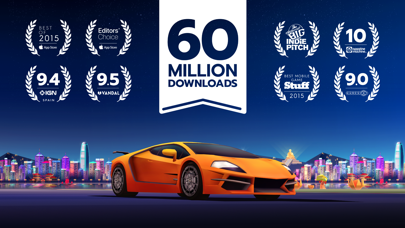 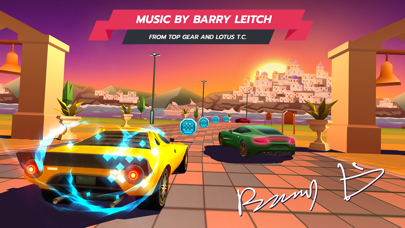 Horizon Chase is a racing game inspired in the great hits of the 80's and 90's: Out Run, Lotus Turbo Challenge, Top Gear (SNES), Rush, among others. Each curve and each lap in Horizon Chase recreates classic arcade gameplay and offers you unbound speed limits of fun. Full throttle on and enjoy!

• 16-BIT GRAPHICS REINVENTED
Horizon Chase brings back the graphic context of the 16-bit generation and creates a style that is inspired in the past without letting go of its contemporaneity. The apparent polygon and secondary color aesthetic accentuate the visual beauty of the game, resulting in a unique and harmonic atmosphere. You'll feel the retro soul of the game on a completely modern body.

• A TOUR THROUGH THE WORLD'S HORIZONS
Horizon Chase is a race around the world. With each new cup you'll pilot your car through extraordinary places, watching the sun setting, facing rain, snow, volcanic ashes and even severe sandstorms. Be it day or night each track takes place in beautiful postcards from across the world.

• BARRY LEITCH, SOUNDTRACK COMPOSER FROM LOTUS TC, TOP GEAR AND RUSH
Horizon Chase presents Barry Leitch, the musician behind the soundtracks of classic arcade racing games Lotus Turbo Challenge, Top Gear (SNES) and Rush. As you play the game, you'll be hypnotized by his charming tunes that compliment the graphical ecstasy of each horizon.

Hey Horizon Chase team, This game is just too awesome. Never seen a game as fluid, engaging, exciting and addictive as this one. Keep it up. Its so cool!! Please include more features to upgrade the various car parts. There is, however one problem. When I get to the Salvador track in Brazil and I reach position 1 - 3 in each of the 3 races, I am prompted to upgrade my fleet of cars. But when I select the upgrade of my choice, the game freezes and doesn’t allow me to apply or confirm the selection of my chosen upgrade. It’s as if there’s a bug in the game. The same also happens when I go to Cape Town in South Africa. After finishing the game in the required position, the game also prompts me to upgrade my fleet but doesn’t apply that upgrade to my cars. Please fix this problem. I would have given the game 5 stars but I will reserve it for when the game is fixed and the bug removed. I do hope you will look into this issue. Thanks. Update: Wrote an email to their support team. They replied saying that they are working on the game. It’s almost close to one year now and they are “still fixing a bug in the game.” A Single Bug! This problem, as outlined above, persists on Apple TV, iPad and iPhone. I and many other people have spent money in buying this game, so developers, it’s not a money issue that you’re having, it’s a laziness & negligence issue. Clearly, you’ve abandoned the development of this game. We feel like you took our money and ran. We do not see the full results of what we paid for. I have downgraded my opinion of you & your game from 4 stars to 1 star. If it was possible, I’d rate you 0 stars. 👎🏼

Great graphics. Great gameplay. Great progression. And best of all, no microtransactions! Have 100%+ completed this game twice on iOS and once on Switch. Both versions are great. Switch has more content but iOS is obviously more portable and also has shorter load times. They have also added tons of courses, vehicles, and other content since the game was first released. All added for free! Hope to see more premium games like this on iOS.

Fun to play and nostalgic!

FIX it
change this🙂

I’m soo mad at this game! Like it was fun at first then it got harder I been tryna pass this level for over 2 hours now! And everytime I bump into stuff the cars would go pass me! It’s so annoying make this game have less things to bump into and make the levels EASIER I ENJOYED IT BUT NOT ANYMORE FIX IT!

This game is a near perfect port of the version for PS4. There are just a couple of things that need to be fixed or added: 1. 120 FPS support for iPad Pro. 2. The Controller works everywhere except for the Main Menu- is this a bug? 3. In the PS4 version, there is an audible indication when you get all the coins in a track. This would be great to have in this version. The soundtrack is awesome on the four speaker setup of the iPad Pro! Plus the graphics really pop- this is an addictive game that always keeps you coming back for more. Thanks for offering it at a great price and updating it!

I like the game A little bit because the cars don’t need fuel. Didn’t you know it doesn’t make a fair race.

One of the Best Racers
PLBrower

Love this game, it wears its influence on its sleeve. Playing this took me back to playing top gear on snes and the cruisn’ series on N64. Wish I could turn off the facebook integration option. Id really prefer not see it. #deletefacebook

I play this with a DualShock 4 controller, and it’s a lot of fun. I bought the premium version. Horizon Chase is challenging without being frustrating. This is great way to pass the time.