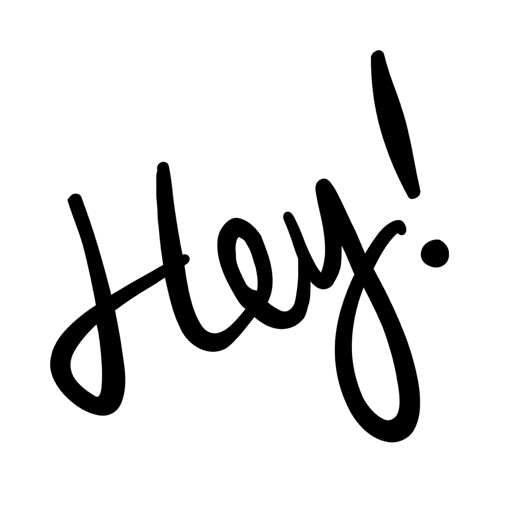 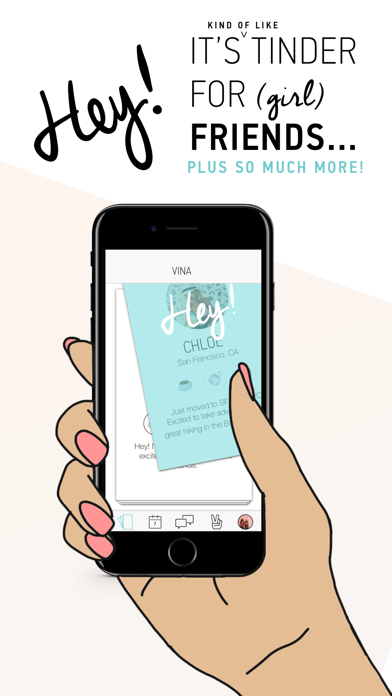 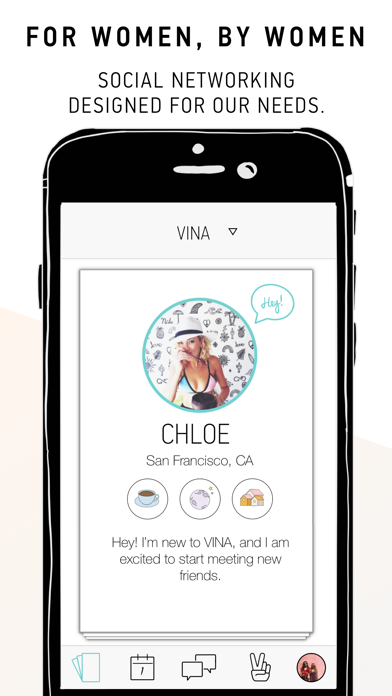 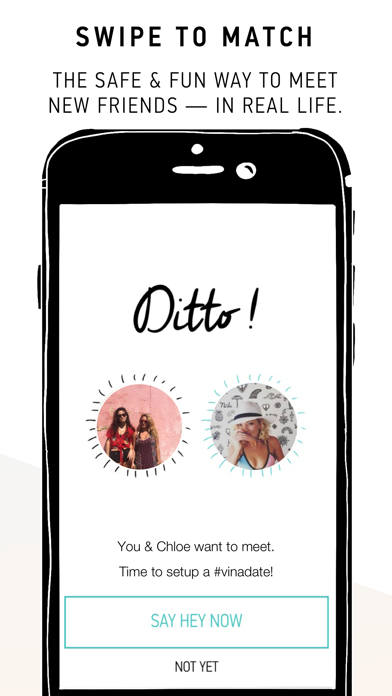 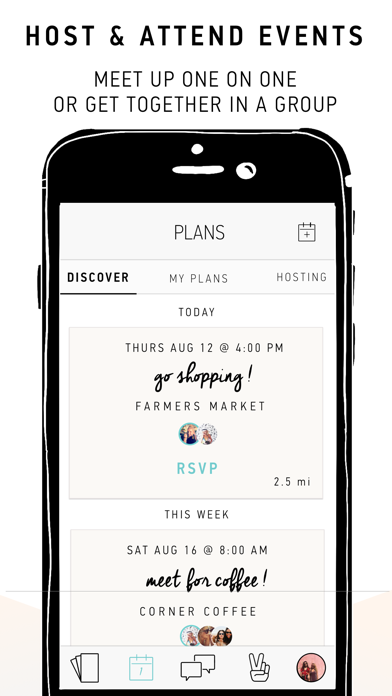 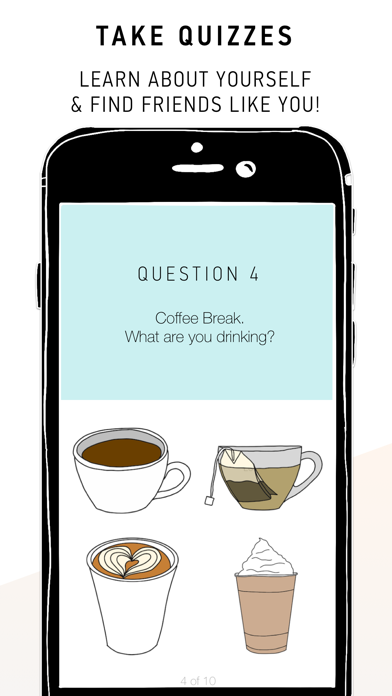 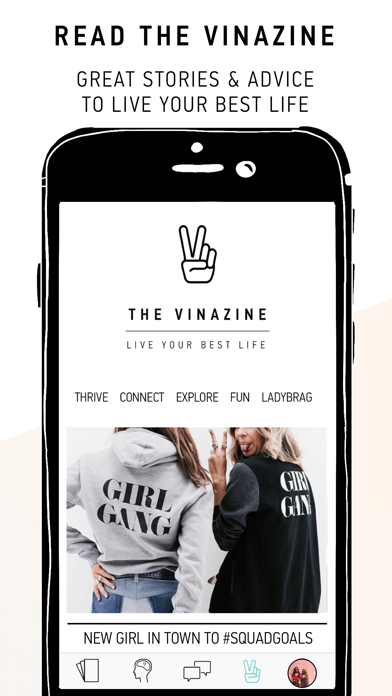 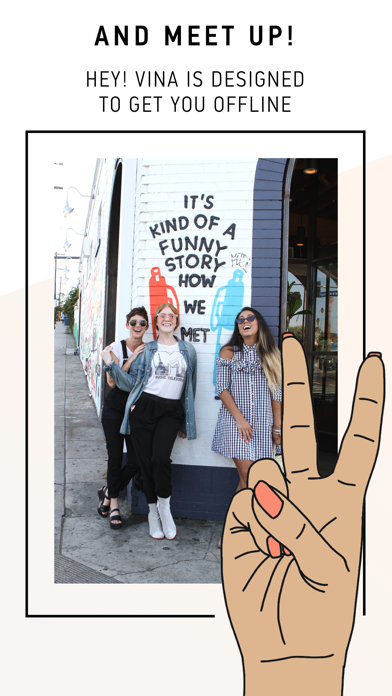 " A few swipes later, I was addicted" - ELLE Magazine

“For women who travel, or have relocated to a new city, a like-minded social circle is now quickly within reach.” - The New York Times

"I think about my first VINA date, and remember that we have plans to hang out the next day. I tell my friend yes, she should use it. Yes, to women everywhere. What do you have to lose?" - PAPER Magazine

"Why shouldn’t you be using matching apps to increase your friend base? It’s no weirder than swiping right to find your next partner, after all." - NYLON Magazine

Hey! VINA is the social discovery app just for women. You can tap into wherever you are in the world (or in your life!) to meet up with friends when you travel, move to a new city, transition life phases, or simply want to grow your social circle. Friend finding made safe, easy, and fun. Yay!

— SWIPE RIGHT TO MEET - anonymously swipe right to indicate who you want to meet right now, and swipe left to skip people you're not ready to meet or aren't interested in

— GET INTRODUCED - once you have a match, you get introduced to a new potential friend. We make it easy to meet with a personalized intro from Olivia from VINA.

— MEET UP - Use our handy Plans feature to post a private invite to meet up or make a public invite to invite everyone in your area to join... the most important part is meeting up IRL!

— KEEP IN TOUCH - you can add your matches and facebook friends to your VINA List to group chat, make plans, or all kinds of stuff.

— BECOME A VIP - match faster and easier by upgrading to VINA VIP! You can now upgrade with a paid subscription to preview who swiped right on you... more premium features to come soon, too!

_____________________________
If you choose to purchase VINA VIP, payment will be charged to your iTunes account, and your account will be charged for renewal within 24-hours prior to the end of the current period. Auto-renewal may be turned off at any time by going to your settings in the iTunes Store after purchase. Current VINA VIP subscription price starts at $5.99 USD/week, and 3 month, 6 month and 100 year packages are available. Prices are in U.S. dollars, may vary in countries other than the U.S. and are subject to change without notice. No cancellation of the current subscription is allowed during the active subscription period. If you don’t choose to purchase VINA VIP, you can simply continue using Hey! VINA for free forever! xoxo

The app is extremely glitchy. I bought the 6 month membership but the app did not reflect my membership and I could not access the paid features for weeks. I tried to contact the app and Apple and they were not helpful. They would not refund me my money. Even when I tried to use the app it would crash constantly. Not a fan, horrible customer service and inconsistent app usability. Don’t recommend. Save your sanity and definitely don’t get a membership.

The app is okay. Quite glitchy at times where I can’t login. Also mandatory to have Instagram or Facebook to sign up rather than just an email. There were times where I missed messages because I never got a notification that was recently fixed. I like the idea but the execution needs work.

This is a cool app but $6 dollar a week is insane, all of the price options r insane. I woulda did it if it were a lil cheaper. U would prolly get a lot more members if u lowered the prices just a lil & maybe offer a free trial period. Trying to find friends not find my soulmate

Hey Hey Vina!!! I really love you guys and the UI/UX is super cute. I have met cool friends in my new city. So big kudos for the amazing work. However, the google API stopped working for a while now!!! We can’t link our address to the event created. I have given the app full permissions for the location service so I am pretty sure that this is bug. Pls pls pls get it fixed for the next release!

The app needs some repairing
Maymay1214

I’m trying to communicate with other vinas, but it keeps on telling me if i have updated to the latest vina download which i have already, so it keeps on taking me to the app on the apple store and it’s already been downloaded. this only happens when j want to message someone. idk what’s going on. i’ve used it before and it was fine. never gave me trouble

Profile confused?
why why??

I signed up and it said I was someone else???!?? That was crazy! Makes no sense if it makes you use your Facebook!?

Whenever I try to create an event, it won’t let me put in the actual location. It automatically gives my current city and won’t let me change it. Their location search function also won’t work for me 🤦🏻‍♀️ It irks me to no end!

No Other Options Outside of Social Media
Puzzled&Disappointed

Initially I open this account with my Facebook profile. As of January 1, 2019 I decided to delete all forms of social media. Since then I have not been able to log into my account and there is no option to login via email. I met a 3 people. It does give the option upon opening the app to sign up FB or IG which I CHOOSE to have neither. It also says “sign up and get notified when we have an alternative”. It’s probably been like that since they first released the app and so I’ll ask, when exactly are they going to create an alternative??? I guarantee it’s been over a year since they’ve had that notification up there. And when they do, will it link up with my previous profile information? If by the end of the year they don’t have an email option, I’m just going to delete the app itself because it’s not worth having something taking up space on my phone that I cannot use. I’m glad it works out great for some though.

I love it! I made so many awesome friends! Can’t wait to make more! 😊