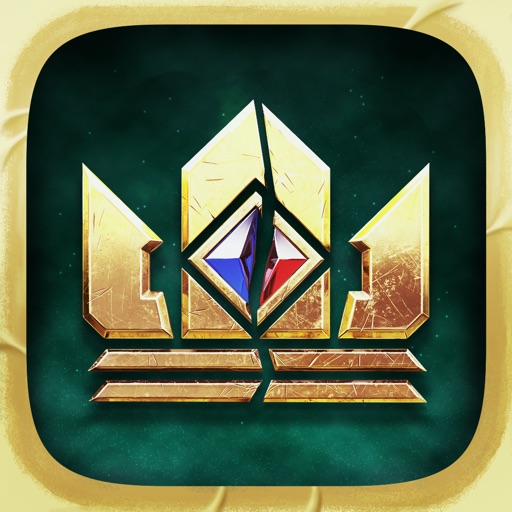 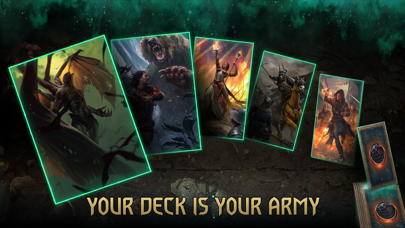 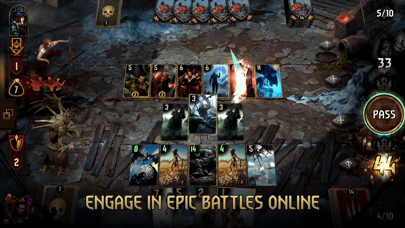 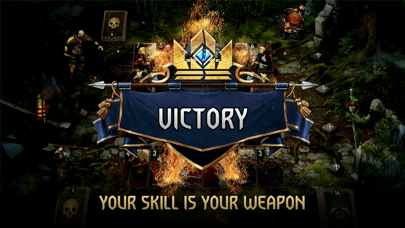 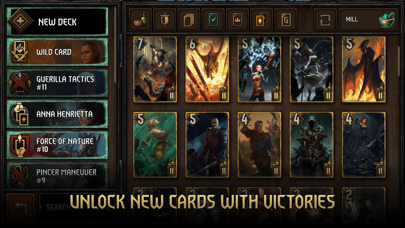 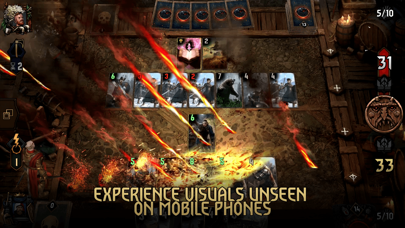 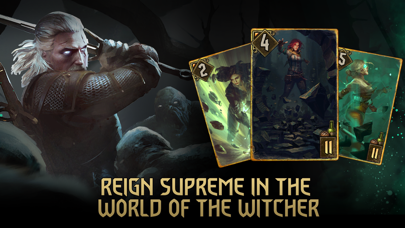 Join in The Witcher universe’s favorite card game! In GWENT, you clash with your friends in fast-paced duels that combine bluffing, on-the-fly decision making and careful deck construction. With heroes, spells and special abilities that dramatically turn the tide of battle, deception and clever tricks are necessary parts of your arsenal.

FREE TO PLAY THAT’S WORTH YOUR TIME — A fair and fun progression system turns the effort of building a competitive collection of cards into pure pleasure — just play GWENT, no strings attached.

STUNNING, ALL ACROSS THE BOARD — Beautiful, hand-drawn art and mesmerizing visual effects breathe life into every card, battle and battlefield, making GWENT both fun to play and a joy to watch.

SKILL BEATS LUCK — Crush the enemy with brute strength or outsmart them with clever tricks — GWENT’s unique round-based gameplay opens up a world of strategic possibilities to play with.

EASILY SATISFYING, ANYTHING BUT EASY — Sling cards across two tactically distinct rows — melee and ranged. Gather more points than your opponent to win a round. Win two out of three rounds to win the battle. It won’t be easy, but not one said it should be.

NO HOLDING BACK, NO HOLDING HANDS — You start with 10 cards in your hand, able to play each right from the start. It’s up to you to open the game with your strongest unit, or save the best for later.

This game is incredibly fun. Unlike all the all card games, it is fair. You cannot simply buy all the best cards and demolish everyone. Plus, there are limits in how many cards you can have in a deck. I’ve only spent a few dollars and have played this everyday and steadily am ranking up. Such a great game and love the extra Witcher lore.

The app info page said that it is compatible with IOS 12 but it just won’t start up. Even when I did all of their troubleshooting on their website, it won’t work on IOS 12.

Fun but poison status kills it for me
Kpop_tart

Better than I expected, and I had high hopes!
SeanLeoBanks

Having last played the beta on PC a while back I had good expectations for the this version, well polished and plenty of opportunities to build your deck! If you’ve played GWENT before you’ll definitely like it

Generous with rewards and lots of depth to the game. The fact that there is no mana system is great. Makes the games a lot more strategic, and someone that seems to be winning but overextends can lose the match in the long run. There is also a much wider variety of decks that are viable and you’ll encounter lots of different ones during play.

Rest assured I’m not an ill experienced player complaining about something I don’t understand. I’ve been playing gwent since Witcher 3 and I’ve been playing the stand alone game since the beta came out on both PS4 and pc. I’ve had almost no complaints about the game on those platforms which joy and I came to play on mobile. That is where the problems began to stack. With my internet connection of 470mbps down, the game is almost unplayable as every few seconds, I am hit with connection lost text boxes lasting several seconds and have often lost matches purely to a lack of connection. A problem not present on other versions of the game. I’ve tried playing on this mobile version for days and I’ve not completed a single match that wasn’t ruined do to the server just not functioning for me. Furthermore, little seems to have been done to make the UI and controls work for mobile. Placing down cards and targeting for effects has been so flawed that more than three attempts to target the correct card with an ability with often failed attempts targeting the card I want tapping on. Along side your cards being so bunched together, even on a large phone screen, where tapping on the exact card you want doesn’t pick such a card but rather a card next to it even if you couldn’t be mistaken on what card you were tapping on. I’ve given this game a week on mobile, and while it functions perfectly on other platforms, my experience here has been unplayable and unforgivable.

Played beta ,,, now back with ios ,,, hope they add it to android too.

Great game but why can’t it update
dema1919

Played this for a week and it’s pretty fun... drawback is that every time I hit update nothing happens :(

I thought it was boring at first because the monsters don’t attack each other. But after a few weeks of occasional gaming I got hooked. This game is very balanced. I used to love Yugioh because I played real cards in my younger days, but it was dumb even back then the way they keep creating stronger cards. Now, yugioh has become even dumber than I ever thought possible. The cards in GWENT are very fair and easy to understand. None are super powerful, and the description is only a sentence or two; unlike the yugioh paragraph. I highly recommend this game. Play about 10 games before you make a decision to quit. You might change your mind.

I’m a huge fan of card games. I’ve played about 7 all at the same time. Yugioh, hearthstone, Pokémon, TEPPEN, Magic, and so on. This game is no joke. One of the only games I’ve played for a very long time and I’m so glad they brought to mobile. My only gripe with this game is that the progress I’ve made on the Xbox version doesn’t transfer over to the mobile scene. But, besides that, this game is top notch! People should definitely check it out. It’s a phenomenal game with much more strategy over rng. Great job devs... you’ve made a gem with this ccg.