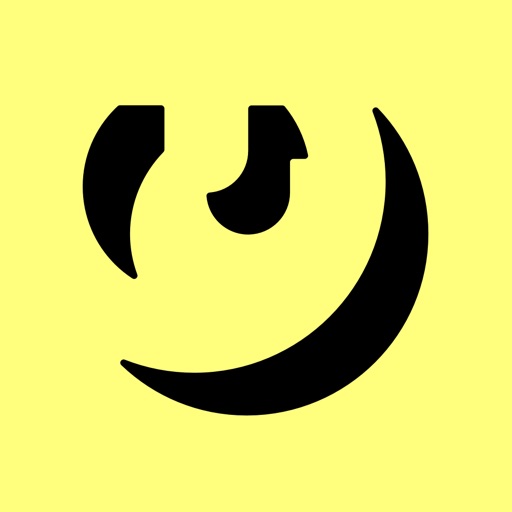 Genius is your pocket guide to human culture. 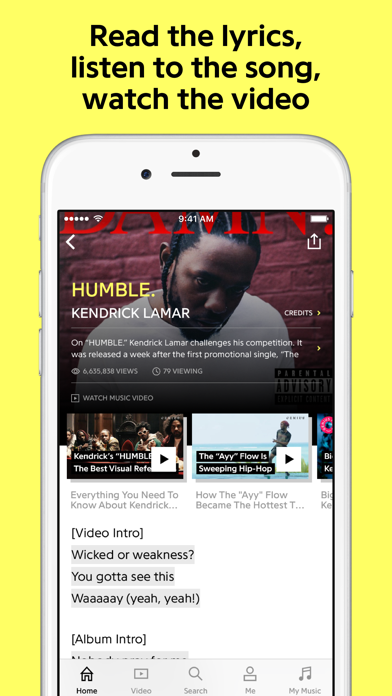 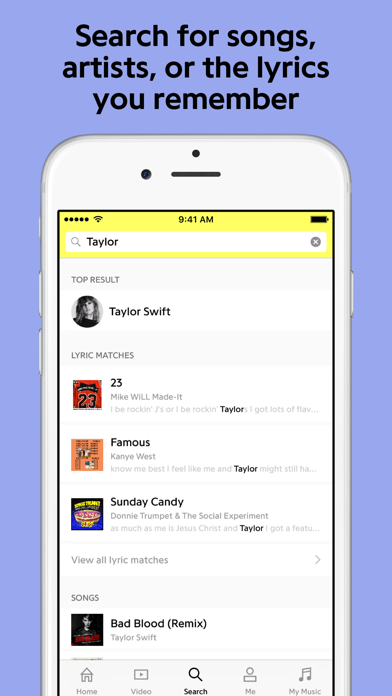 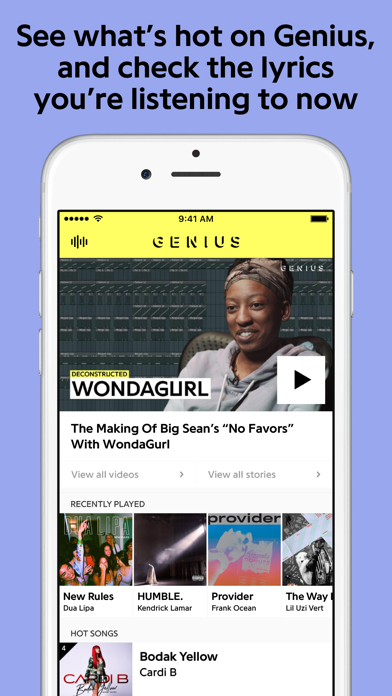 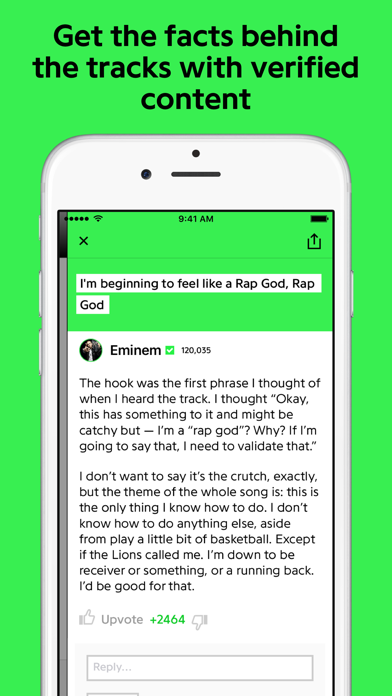 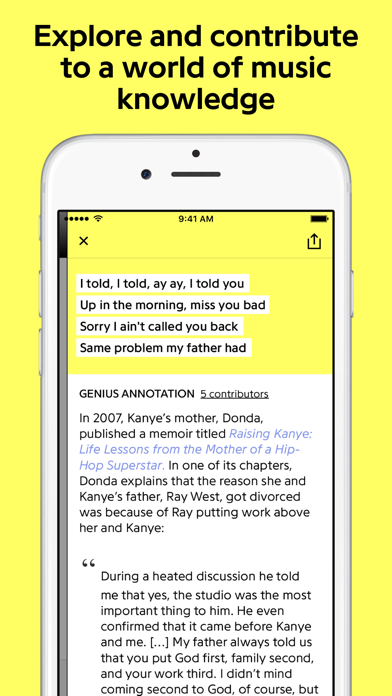 Have you ever been confused by a song’s lyrics? Had trouble understanding a line from Shakespeare or the Bible? Struggled to understand the context of a news article that seems important?

With Genius, you'll never have to worry about this—or anything else—ever again. Genius breaks down lyrics and literature and the news with entertaining line-by-line annotations.

- Explain stuff in plain English
- Reveal references and inside jokes
- Define unusual terms
- Check facts and claims
- Give context—how does a piece fit in with the author’s other work? With the genre as a whole?

Genius is like your smartest, most knowledgeable, most attractive friend, but instead of being a flaky pretentious human it's a fun iPhone app.

ANNOTATE THE WORLD FROM ANYWHERE

You’re the genius: highlight some text, tap “Annotate”, and share knowledge about the things you're obsessed with.

FIND LYRICS FOR THE SONGS PLAYING AROUND YOU

Just hold your phone up to the music, tap the soundwave button (powered by Gracenote!), and lo, the annotated lyrics appear! And easily navigate the lyrics for all the songs in your iTunes library.

REVEAL THE DEEP INTERCONNECTEDNESS OF CULTURE

No piece of human culture stands on its own, and Genius shows you how it's all connected. Start on a Kanye West song and with a tap, you'll find your way to the Bible verse he references, to the T. S. Eliot poem mentioning that verse, to the novel which pays homage to Eliot, to the episode of Breaking Bad where a character is reading the novel, to a news article about the episode!

I really like Genius when I’m digging through for reviews on a song or album and who produced or worked on it. But to be honest, if I’m looking for something like album credits, it doesn’t show up on the app. It also feels clunky, but it does make Genius as a whole bad. Brushing up on the UI could make it better.

Barely works and sends me through a loop to sign in

Image my annoyance when I just discovered Musixmatch pays users to properly transcribe lyrics, after wasting hours of my life transcribing, correcting, formatting, editing, annotating, etc lyrics, plus fixing album cover artwork, adding all the missing YouTube & Soundcloud embeds, etc! Genius licenses these lyrics out to services like Apple Music, regardless of how inaccurate they are, and they make mad money off of the work of people like me. You started as yet another lyric & music wiki requiring users to rebuild from scratch, when Genius could’ve easily scraped lyrics for majority of the songs from the plethora of lyric websites available. For all this work, and most of it goes uncredited or gets ignored or deleted by the very few “Editors” with the power to do anything. I initially I got interested in helping on Genius when I was able to pull genius lyrics from the HTML for my basic lyrics widget for personal use (Android), for all the songs that didn’t have lyrics yet, but Genius overhauled their website making this impossible, and has now blocked non-Commercial users from accessing THE LYRICS from Genius’s API!! I mean, what else do I need your API for? If I work for free, and help you make money, you can’t at least allow me to access my own work on a simple music widget when I play music on my phone? Seeing your biggest competitor now offer to pay transcribers after landing a Spotify contract, I feel very taken advantage of. Musixmatch won’t allow me to post lyrics I’ve already transcribed and posted to Genius for “copyright” reasons — eventhough I personally transcribed those lyrics from scratch BY EAR. I guess now Genius owns the copyright for these lyrics they didn’t write, the music rights they don’t own, and the transcription your users created in exchange for some “IQ points” — which only help users access more “editing privileges” on your website that shouldn’t be restricting this access to begin with. Tired of dealing with the awful interface to fix the auto-metadata Genius attaches to every new song (why tag everything as “Pop” genre by default?), painfully add album release date, producer and writer to EACH SONG INDIVIDUALLY, and the confusing way you have to add a new song page under the album tracklist AND THEN drag and drop it to the track number where it belongs — rather than simply letting me TYPE THE SONG NAME INTO THE BLANK TEXT BOX NEXT TO THE TRACK NUMBER. When you got an album where lazies only created pages for 3 songs on a 15 track album — then takes FOREVER. Then I gotta go thru each track & add the publishing date, writer, etc one-by-one — eventhough it’s already in the album metadata. Also, why does Genius not actually use markdown (they incorrectly call it “markdown” tho), or idk, actually provide a a text-formatting editor for the VERY limited formatting options? This adds so much time to transcriptions, especially because Genius requires tons of odd formatting choices for lyrics. None of the formatting, mind you, even makes it to the apps that license Genius’s lyrics! 1-Star until you agree to pay your workers and get your website, web-app, and iOS and Android apps WORKING. Make transcribing and building your entire catalogue of information, knowledge, and our personal annotations from original research EASIER to post. Instead of overhauling the website to literally hide lyrics from the HTML, you should’ve brought your UI out of 2001.

HEAR ME OUT
j he ljbgonkvfjvn in

Welp wound love to get on the app and yet it won’t let me make an account. More like won’t let me make a username as in it says unable to sign in. Then when I try to automatically sign in it just takes me make to the same screen. So it would be cool if you could fix it!!!

really good for finding music if all you know is the lyrics, i’m sure there’s some things people don’t like but i can’t find anything that bothers me, truly an amazing app!

This app use to be good…
wh0wantscake

If you are a person, like myself, who likes to read the lyrics while listening to the song, then LOOK ELSEWHERE. This app use to be great, but now the ads/videos are imbedded inside the lyric text, so as you scroll down the ad will stop your music from playing. Over and over and over again. LAME.

It’s so hard to find songs or albums because the search bar is outdated. For example, I tried to look up a specific album that’s popular and couldn’t find it on the search bar so I had to look up the artist which also took a while to find, then go to the album from there. Please fix the search bar

I love this app. I use it daily! Learning new things about the music I enjoy is fascinating. The only complaint I have is the ads that auto play audio or otherwise override the media I playing in the background while I browse the app. I have to open control center, tap play, then hope that the next page I load doesn’t have an embedded ad with audio or video. I fully understand and support the use of ads to pay the bills. But don’t let the ads spoil the experience.

For an app that is an over glorified web page, it crashes way too much