So begins a new tale of crystals... 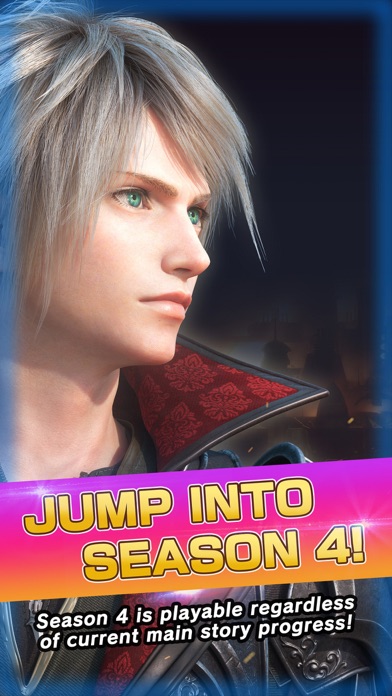 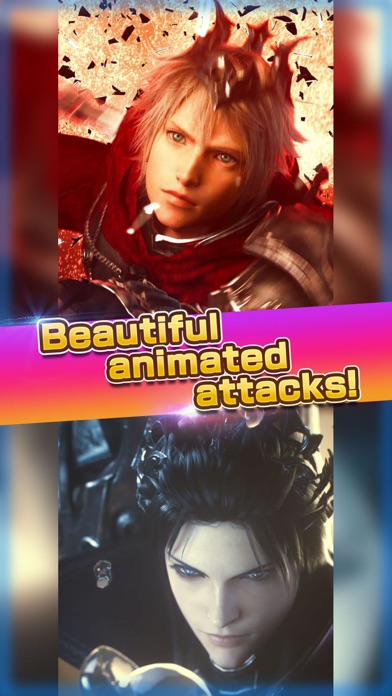 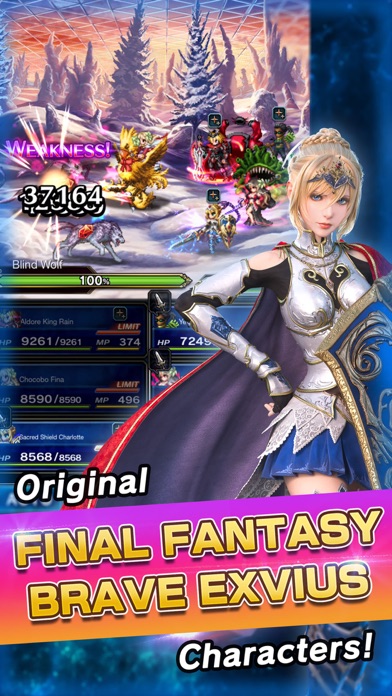 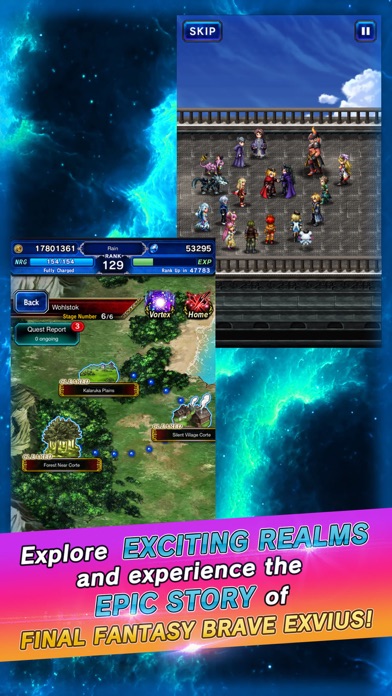 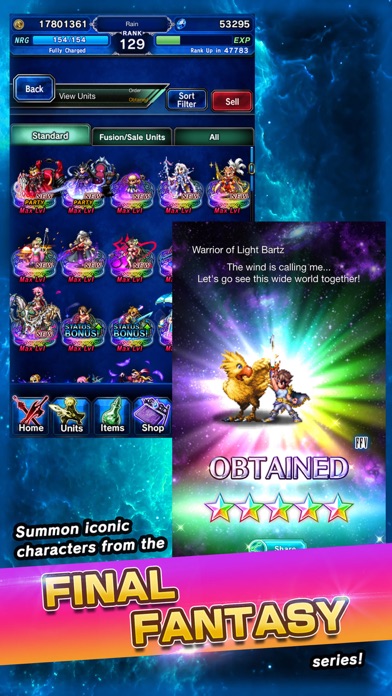 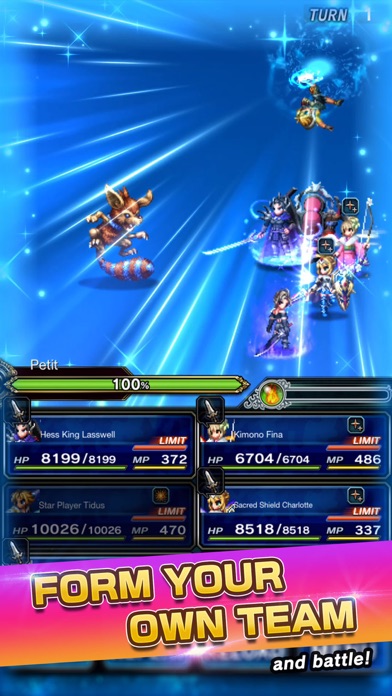 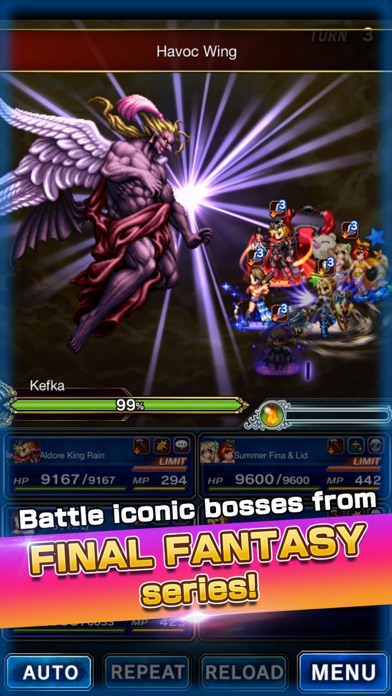 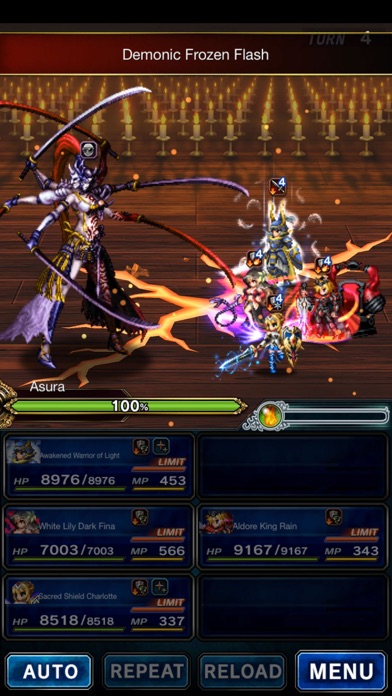 Join forces with legendary heroes from your favorite FINAL FANTASY games, and experience a tale of high adventure in the palm of your hand.

With exciting battles, awe-inspiring visuals, and a whole realm to explore, this is one epic journey you won’t want to miss!

- Intuitive and strategic battles
Unleash devastating attacks with a tap of your finger, and combine magical abilities with tactical know-how to overpower your foes!

Join forces with Cecil, Terra, Vivi, Vaan, and other legendary heroes from your favorite FINAL FANTASY games, and experience a tale of high adventure in the palm of your hand.

And that’s not all—summon legendary FINAL FANTASY espers like Shiva, Ifrit, and more with awe-inspiring visuals!


- A vast realm to explore
Roam freely through exotic locales, and delve into perilous dungeons to search for items, rare treasures, hidden passages, and routes to new destinations!
Converse with the denizens of the realm and undertake challenging quests to reap items, gil, and even rare rewards.

Visions――
The hopes and dreams of legendary warriors given life.

Lapis――
A world of crystals and the visions that slumber within.

Harnessing the power of the crystals, mankind prospered, nations flourished.
But just as day gives way to night, that era of peace proved but a fleeting illusion.

Now, as their world stands on the precipice of ruin, two young knights summon visions to their side as they strike out on a journey to chase the shadows.

So begins a new tale of crystals, and the heroes who would save them...

I absolutely love this game! Need I say more. There’s so much to it and so many amazing characters. I won’t speak of any spoilers~

I just downloaded the game not even a week ago it seems like it always has to download something. I only paid 99 cents for a bundle and already I have some top heroes while that’s not inherently bad it sort of takes away from the gameplay while it is final fantasy in some ways in others if feels like a gacha game.

The current content is based around new pay to win units that are 100$+ to get.

As with so many other projects in the App Store greed led to the end of this game for me. This game has its annual anniversary over the July/Aug period and this year they jacked up the cost of units and “rewarded” long time players with garbage tickets that had no worthwhile guarantees and less than normal rates for NV units (the type you actually want) and a limited pool that did not contain the more recent units so even if you do pull an NV, it’s got no chance of being something more recent and powerful. It was already insanely expensive but now it’s just disrespectful to the player base as a whole.

Player since launch and game is going downhill
Fhua5

As a player since launch and someone who has spent money in this game, the recent updates have made this game less and less enjoyable. From the countless bugs every week, minimal new content, and just the sheer disdain for the longtime player community, this game is not what it once was nor close to its Japanese counterpart

Game is fun, but bugs, greed, and a horribly run company are a problem
Toddnpti

Dude. I have never played a game that has so much maintenance and still has bugs, massive game breaking bugs. The greed is high in this game, they don’t reward longevity in their player base, the last year has been very stale, they have gone away from story telling and developing characters to grind style events that just feel like chores. Played since launch but the end is coming soon for me. Play another game that appreciates their players instead

More scam than anything
mel_qrow

Game is very fun dont get me wrong. What made me uninstall is the fact that apple is overcharging for small purchases. Example i purchased the treasure summon for $11. Simple. Doesnt break the bank and I felt like supporting the dev. Get a notice from my bank that apple charged me $32 for that $11 transaction. Honestly if you want to get scammed by apple pay for things in game. If youre going to play free then youll be pleased because f2p is much more viable. Just sad that apple was the cause of my bad review because on the app store it really should only be 2*