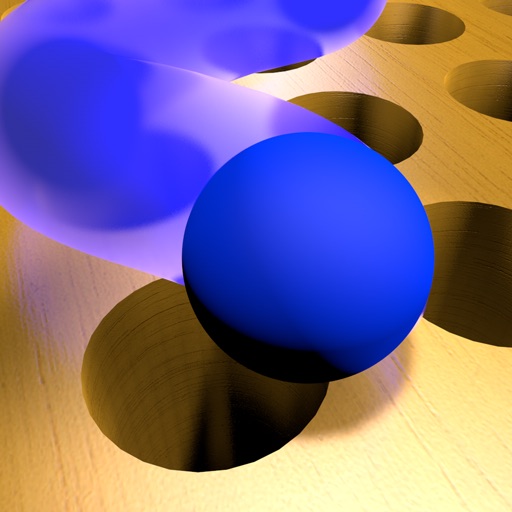 "Realistic!! ★★★★★ Man, this thing is realistic!! I swear it plays just like the ones in Seaside, OR! I wonder if this app can help me improve my game on the real machines. :)", said Tallwes.

"Just like the real thing. ★★★★★ This game is great! It's just like the real game we used to play at Indiana Beach. It is just missing Helen the game attendant to powder our balls", said MrBoosh1.
"Very well done. ★★★★★", said Unhappyclicker.

☆ The classic American boardwalk game is reborn for iOS!

☆ Fascination is as simple as a game can be. Just roll the ball down the table! Each hole the ball goes through turns on a corresponding light on the board. Get a line of five lights, horizontally, vertically, or diagonally to win! But watch out, you're not alone! Other players are racing to get a line first!

✪ Bonus tickets are awarded for the special red and yellow lines!

✪ Use the tickets you win to buy awesome prizes that further enhance the game!

✯ Fun for all, small or tall, as long as you can roll a ball!

★ Single Device Multiplayer!
✫ Four players on an iPad at the same time! Two players on one iPhone or iPod touch!

Simple and fun. Can't wait for the updates!

This game gives you the feeling of an old style arcade. It is fun to play, easy to learn, but hard to master. :) I can't wait for the 4 person iPad update!

Man, this thing is realistic!! I swear it plays just like the ones in Seaside, OR! I wonder if this app can help me improve my game on the real machines. :)

This game is great! It's just like the real game we used to play at Indiana Beach. It is just missing Helen the game attendant to powder our balls.

Well done! Would love to see other versions of these tables too.
Unhappyclicker

Very well done. I would love to see other versions of these kinds of games too. Like the ones where you play solo and try to make poker hands to win tickets. You have 9 balls and different holes represent different cards.

I've never played the real life game that this says it emulates, but to me, this game is a bit odd. First, as far as physics go, it doesn't seem realistic. If I roll the ball a certain direction, it seems to go anywhere else except that direction, almost like there's a force other than regular gravity. I play the Skee-Ball game on iOS quite a bit and THAT feels like realistic gravity to me. The balls goes where I roll it. In this game it does not. If that is how it is supposed to be, fine. If the physics are supposed to be like the Skee-Ball game, it would make it very easy to get five in a row. Second, the sounds are quite bland. No sound of the balls rolling and barely a sound when it drops into a hole. Again, maybe I am spoiled by other rolling ball games, but I'm expecting a sound when the ball rolls and when it drops. Finally, it shows three lanes, yet the game tells me there is a fourth player. I don't see that player's lane at all. Odd. Overall, it's a good start but needs work.

THE BEST THING ABOUT THIS APP IS THAT I DELETED IT!!! WAIST OF MB USEAGE!!!