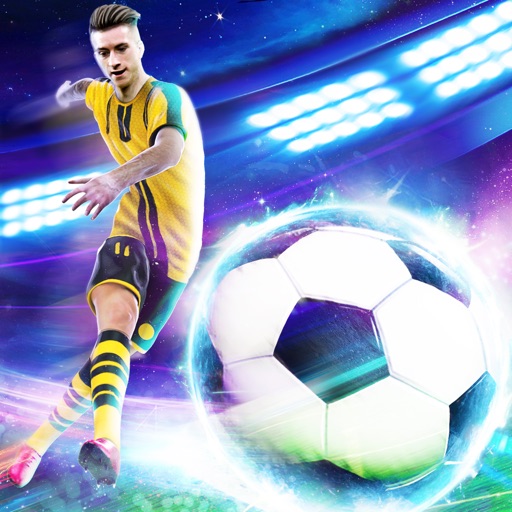 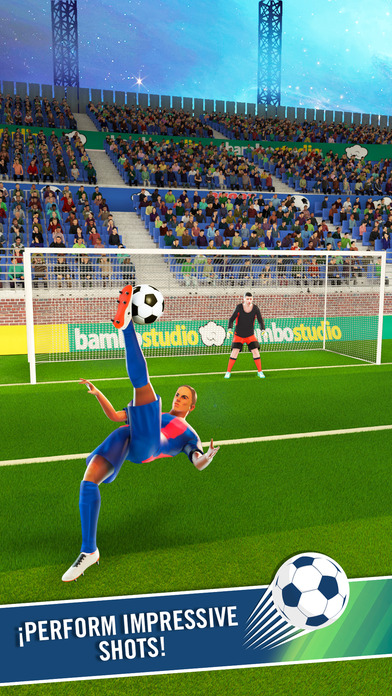 The soccer game that will make you feel like a world star!

Would you like to feel like a true legend of world football and live a career as a professional player from beginning to end? The road is hard ... but it has its rewards ...

Feel like a real world football star and play now Dream Soccer Star, a game where you have to demonstrate your skills as a passer and shooter, in which you will become little by little a living legend of European football, you will be a soccer champion If you show that your passes, shots and even Chilean and volleys are the way to make your team reach the top, or better yet, so that the great European clubs make you huge offers to play in their plans and become the Greatest scorer in the history of world football.

You will start from below, in the hells of low divisions, where there are few fans and little appreciation of the work of the professional footballer, but if you manage to get your hobby and your coach to play your part, you will become the star of your team And big clubs with big budgets will be interested in you and will make great offers so that you play for them and make them win the league or ascend to better divisions.

Would you like to have a huge mansion and live your career as a European soccer player? Drive the best sports cars and fast on the market or even have your own desert island? This is your game, you can become a great dream star in the difficult world of professional football and have luxuries unattainable for most mortals. This is Dream Soccer Star, start by playing big matches in third division and demonstrate your skill by haggling, giving assists of goal and scoring spectacular Chilean to the rival goalkeeper. Your coach will trust you more as you play games, just as your fans will chant your name in the stands, and that will make you become captain of the team and take care of transforming the occasions to standing ball as the corners, penalties, free throws , Direct faults ...

All this accompanied by a wide customization in your image as a soccer player, change your hairstyle, the color of your hair or, why not? Buy a new pair of boots to increase your shooting skills, precision, pass, resistance ... There are no limits in Dream Soccer Star, travel through all the stages during the long season of the league where the hunger and hunger of goal will be decisive for Give your team victory in the field. Your opponents will tremble when they see you approach the area and shoot at goal with power and precision, always shoot to score, since the errors will be pointed by the mister and this will lower his confidence.

Dream Soccer Star allows you to become a football star, its impressive graphics and real physics will make you feel that you play in a real football game, jump into the field and show everyone that you are the best, be a star, conquer your Amateurs, win your coach and fight to be a star on and off the field, where you expect sponsor events and training in which you have to choose if you want to participate or instead you prefer to reserve your energy for the encounter with your club.

Hundreds of teams from different countries like Spain, Germany, Italy, England, France ... The best clubs in Europe are waiting for a scoring star like you, and they will fight to hire you to play for them and make them reach the top of the championship with Your spectacular goals and acrobatics.

Your goal is to bequeath to the First Division and win the title to be signed by the best football teams.

We are waiting for you in Dream Soccer Star, do not hesitate to send us your comments so that we will improve the game experience and update the content.

Hey I’m a soccer fan and I will tell you my career in this game. It was that I was sacked from my team. Now when I moved I was on fire. I MEAN FIRE. So I’m in fourth with my team and this could be the best. But please remove the 11% miss chance missing

Remove ads or I quit
Brand_newLIAM

This game is good but REMOVE ADS I’m tired of them, And if I have to pay to get rid of them. Your never seeing the end of me! When I’m training ADS pop up every 10 seconds! This needs sorting and fast or else, I’m reporting your game of inappropriate advertisers Because all the ads that come up Re girls in bikini shorts and bikini braws I ha e already reported the ads, but they still seem to pop up! This needs to stop Now Mad guy, Lucas

You need more hairstyles for the game and have different colors for different areas in the hair, plus if I play bad in a match it always acts like you hand ball a hatrick or scored 10 own goals, you should have news on other players, and the players should actually have the ball and maybe assist you, all they do is stand and hope for the ball, they need to run to open space, and only play when the ball is with you? NO! You should be able to play full time or be benched, more like FIFA career mode. And you should have more stuff in the shop and name things properly, bamdidas? What’s that? Adidas ugly brother? Plus, Nike and adidas, or bamdidas and kike, they look the same!?! Make difference! And it’s like if you don’t score or get intercepted, they are always so negative!😡. And if your gonna rate the game 4+, you should do somthing about the ads! Some are 17+, or 12+, so take a good look at that. Plz do something about this!