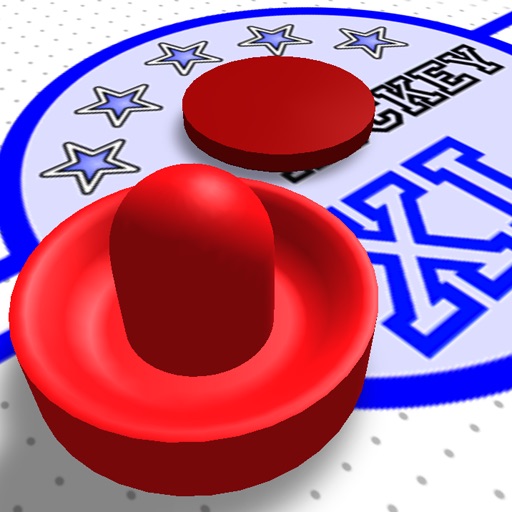 The ultimate air hockey experience on the iPad and now, iPhone/iPod Touch. Play against the CPU or head to head with another player. NEW fun training modes, ONLY on Air Hockey XL. Realistic look, feel, and sounds, perfect for the iPad and iPhone. Rotate your device to landscape to view the game in perspective mode.

FEATURES:
• 2 brand-new training modes to help perfect your speed, timing, and accuracy. This feature has never been seen in any other air hockey game before. Practice against the clock and try to improve your best time.

• Fast paced action makes you forget you are using an electronic device, and captures the excitement of a real arcade.

Too sluggish
Another nickname that is not taken

Way too sluggish. The paddles move by simply tapping on the screen which makes moving them not intuitive. My kids have just started tapping on the puck itself which seems like cheating.

the game is cool for two players. Would be nicer if the puck responded better to the paddles (it seems too fast)

This is a great update. Devs are responsive and listen to suggestions. Great job!

This game was awesome on iPhone and know with this update for iPad it will be much fun !

I love the option of being able to quickly switch to a perspective view via landscape mode. It makes the game seem more realistic, as if you feel like you're really playing the game in real life! The sound and puck trail effects makes the game ever so tangible, to the point that your instincts really start kickin' in. An options feature allows you to toggle the puck trail on and off, choose a mallet size and color, as well as change the tabletop design/theme. A few customizable aspects of the game that I would like too see in the future would be adjustable goal opening sizes, as well as being able to customize my own tabletop design, such as colors and tabletop sizes. Heck, maybe even choosing a screenshot from your photo gallery would be somewhat interesting! The help feature does a decent job of introducing the various aspects of the game, but I suggest adding more specific instructions on controlling the mallet and hitting the puck. Perhaps also consider tweaking the AI difficulty a bit, because "easy" mode feels more like normal to me, and "normal" feels like hard. I also had some minor issues regarding the responsiveness of the mallet touch controls. Sometimes I feel like its a bit slow to react on my iPhone 3G. So other than a few minor issues that I have with the game, I think its really fun and enjoyable! Great for quick matches especially with friends, since it has a two-player mode! Good game!

One of the better air jockeys, well worth it!

This is a blast
amdovsen

Lots of fun and very well done. You can easily lose track of time. Closely resembles the real thing.