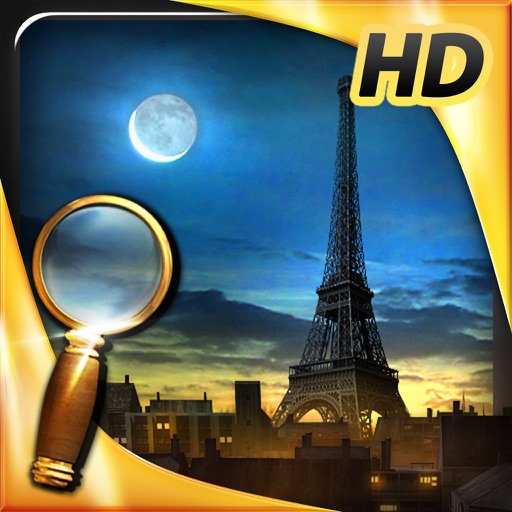 The EXTENDED EDITION has finally arrived!

Leïla Saraostre, a young foreigner, moves in a famous parisian neighbourhood, Montmartre, to study at the art school of the Louvre. There she meets Uriel Ruthven, a young and enigmatic man. She quickly falls in love. He takes her around and makes her discover the bright city, Paris, before disappearing mysteriously…
Discover Uriel’s strange secret!

A THRILLING ADVENTURE:
After the sudden disappearance of Uriel, Leila will do her best to find him. She will even venture in the darkness of the catacombs... The secret they hide turn out to be more than dangerous. To discover the end of the story, play alternately Leïla then Uriel !

USEFUL HINTS:
Use the Hint: a shiny halo helps you to find one of the objects.
No more hints? Not enough time? Find the bonus stars hidden in the scenes to get more hints or time!

MAGNIFICIENT SETS:
Examine different famous places in Paris: the subway, the banks of the Seine, Montmartre neighbourhood, the Champs Elysée, the Père Lachaise cemetery, the Trocadero gardens, the catacombs, etc.

You have a comment, an opinion, a question, a proposition about one of our games or apps?

Send an email to [email protected]
or
join our Facebook fanpage!

In Chapter 4 and followed Uriel in "underground cemetary", I put coat of arms on image from inventory. Followed arrow to end, was taken outside to Seine River and Notre Dame scene, unable to proceed. Deleted and rebooted. Same thing happened, meaning could not continue. App store says compatible with my iPad Air 2. Not true. PLEASE FIX Would give app a higher rating if not for the frustration of not being able to continue.

Do not understand this game.
Meema47

I keep going back and forth to the train station. There are no objects to find on the bottom of screen. And forget about the map that was a job to find out what connects to what

Boring, vague, scene darkens constantly as you try to find impossible things, way too expensive for what you get, absolutely no sense of characters, and overall just plain frustrating. I will certainly make note of the developers of this game and make sure I never waste my money on any of their products again.

Know what your talking about before you post
Snickysnoo

These 2 posts are wrong! The train station was my favorite part. You have to use the map to know which way to go. The train station is just a vehicle of transportation and not a scene to search for the objects, although there are some parts in the station you need to search. I really liked it because the map and station very much resembled Paris and most definitely navigated that way. Maybe it's because I have been there and actually used their train system. I found it to be very fun, loosely reminiscent of Twilight in terms of a forbidden supernatural romance, and graphically pleasing. I do wish there was a bit mor character development and a little more lengthy. Kinda short.

Was anyone else having glitches? I found that the story kept skipping around and parts of the text from other parts of the game kept coming up. I like this game, but if an update occurred to which I could play it without being confused, that would be great!

I am having the SAME PROBLEMS
Ciarab1969

UPDATE: HAPPY HAPPY! Here's how you do it. :) on the left hand of the screen, you have your tool bar with the question mark and etc., well at the top of the bar you have a purple ticket with a brown stripe down the middle, OK, CLICK that and see where YOU are on the map (if you were like me, I rode that train everywhere) I'm pretty sure you are stuck on the third part of the game, practically the beginning, I'm guessing you need that place at the very top of the map, there is a checkered flag where you NEED TO BE, you may or may not need to ride the train to that spot, when you are their at that train station, I can't believe how easy this is, cause I was so frustrated, but just exit out of the train station onto the street. Don't take any more trains-but DO TOUCH THE EXIT button and next thing I know-I'm on the street! I hope this HELPS : ) and I hope I am able to find my way thru the rest of the game. FIRST REVIEW I can't get out of the dang train station!!!! UGHHH!!!! I am so frustrated!!!!! Somebody help me!!!! I read the one persons posts about how the station is a way to travel to the next scene and how they had lived there before, well, I live in DC and their system doesn't seem all that much different, and trust me, I "rode every train" and still NEVER made it to the next scene. For the life of me-I can't figure it out. I'm so bummed...,

The objects are more often than not little black scribbles on a beautiful picture. The storyline has some intrigue but the frustration of trying to find undistinguishable scribbles took the fun out of it. We are constantly asked to find 20 of this and 10 of that. The game is also short with no replay value. I can't recommend this one at all.

This game could use some serious quality control. As others have stated, game story skips around. One scene was clearly meant to come after another - the developers placed it in the wrong order. Also, poor game response to my clicks; there were many times I couldn't select objects, but using a hint confirmed there was indeed an object there. The developers put this game on sale for $0.99. That's about what it's worth.

New: Finished it and had some of same problems as other users. - lame story with no development - skips round to wrong scene leaving story confusion - return to same places over and over and have to look for same things - frequently ignores your selection of an object and then when you give up and ask for a hint, shows you the same object you've been trying to select - has objects that have no form or are basically shadows so you can't see what they are supposed to be - needs better help - needs more variety - needs to go in sequence - needs to let you get out of a scene to go elsewhere - there are really only about 10 scenes plus the metro corridors and platforms Not really worth the $.99 or the wasted time Old: I don't know if they are rushing to get their product out or just don't care if people enjoy it. Buy this game if you like to spend endless hours trying to figure out obscure puzzles with virtually no instructions. And buy it if you enjoy following instructions and still being stuck at a level. I have 2 of this developers games and i've reached the point with both that I am deleting them and will never buy another. It is such a shame because the graphics are gorgeous. The metro map is actually well done and looks just like Paris. I've had lots of experience with hidden objects games so I do not think this is just a user problem.

Not so good
sunlover331

Go to your settings turn your brightness all the way up, use the purple tickets to get to your destination, refer back to map & tap checker flag ( once you have used your hints a gold star will appear ) for an extra hint: developers come on ! You can do better, more instructions & quality of objects are very bad, wish I would have waited for this app to go FREE